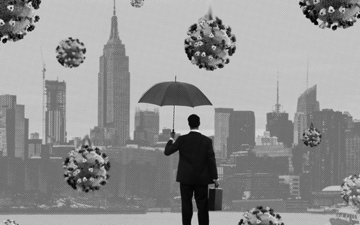 OTTAWA – The unprecedented and sudden widespread economic shutdown that has thrown millions out of work in multiple industries during the worst pandemic crisis since 1918-19 begs the question — When Canada gets back to normal, what will normal look like? With a publicly available safe vaccine for Covid-19 not expected until at least the spring of 2021, according to medical and scientific experts, this could be a long process.

It is hard to imagine what might change over the long-term, after this unprecedented shutdown, because “this is such a salient event with very catastrophic effects right now,” says Andy Bauer, an assistant professor with the University of Waterloo’s School of Accounting and Finance.

“I think it would be really sad if we didn’t take this as a warning that there are things that need to change. In some ways we have these economies which work in good times, but don’t work in bad times and this is one of the worst times we’ve seen in recent history. When the entire market has to shut down everything goes. The things that we’ve kind of put our faith in go away,” he elaborates.

“I think there should be a lot of weight behind the idea that we need to build in some safety nets into our system, because we can’t count on things being great all the time. And when things are not great, it’s really disruptive to the economy,” Bauer notes.

One issue to address is how to get shareholders to be less myopic and to think more about the long-term value of preventing worst-case scenarios, suggests Bauer. In terms of health and pharmaceuticals, for example, at least a portion of health spending should involve preparing for a major issue like a pandemic ahead of time so society doesn’t experience a major disruption with a need to shut down completely. This would also be good for the financial bottom line over the longer term, he says.

In terms of potential long-term consequences, “in my experience, big crises produce strong regulatory responses,” says Francesco Trebbi, a professor of economics at the University of British Columbia’s Vancouver School of Economics. He notes that where those responses are going to manifested in Canada remains to be seen — perhaps with respect to public health, or in the form of new programs to assist workers, families or small businesses.

“There seems to be a lot of action on helping small businesses bridge loans and all sorts of other things that are necessary to efficiently overcome a temporary situation. But at least we know this is temporary. That’s one major advantage that we have relative to a standard financial crisis.

“So loans may be sufficient to bridge this without massive reforms. There could be even more permanent crisis response agencies put in place that hopefully are going to help us the next time around. It will be nice to have something in place for emergencies,” says Trebbi, who notes that in the U.S., the Ebola virus emergency between 2014 and 2016, which was primarily confined to Africa, prompted the creation of a pandemic response team, which was ultimately disbanded in 2018 prior to the Covid-19 outbreak.

The problem is that when a number of people in key places forget about what was needed during the last crisis, they plant the seed for the next crisis to occur, he warns.

The seemingly unbroken march to globalization is another area under scrutiny during this pandemic as many countries find themselves short of critical medical equipment. Trebbi hopes the coronavirus experience will not result in businesses placing less emphasis on globalization, in areas such as international supply chains or out-of-country manufacturing. “It will be a very bitter fruit if that is the case,” he says.

“I’m looking at my home country of Italy right now because this is, I think, really a crucible for the European Union in terms of intra-union assistance. A true union requires a plan of integration and cooperation between countries,” Trebbi elaborates.

Likewise, in North America “a quick recovery in the United States would massively favour us from the perspective of international trade and vice-versa. Canada is the biggest trade partner of the United States, so it would be nice if less emphasis on globalization didn’t happen.”

Also, he notes, “I certainly hope that China recovers soon, not just in terms of the productive capacity of the country that is so important for exporting to Canada and the U.S., but also from the perspective that the Chinese consumer is becoming a more and more important part of global aggregate demand. And it would be nice if we had some part of the world picking up in terms of aggregate demand,” stresses Trebbi.

But it is a delicate balancing act, because at the same time, the world must be on guard against potentially extremely damaging secondary contagion waves of the coronavirus, he warns.

A lot of the global supply chain has been currently disrupted during the pandemic and many firms are realizing how costly it is to be linked to many different places in order to obtain its inputs, notes Arvind Magesan, an associate professor in the Department of Economics at the University of Calgary. As a result, “I think the global supply chains will be disrupted permanently because of this. There’s been a political trend toward anti-globalism. People now have a real economic argument for why it makes more sense to turn inwards. A lot of it was previously based on emotion and maybe anti-immigration sentiment, but now there’s a clear economic rationale,” he says.

“We want to have all this stuff that we need to produce our own goods at home, so if there’s a crisis again we’re not out of luck and unable to produce, with firms going out of business,” Magesan elaborates.

If businesses choose to back away from globalization, they will see their costs increase, warns William Mitchell, a professor of strategic management and the Anthony S. Fell chair in new technologies and commercialization at the University of Toronto’s Rotman School of Management. Spreading out the supply chain globally reduces costs and improves quality and so either businesses — and their customers — will be willing and able to take on a long-term increase in costs and reduction in quality by having a lot of small-scale production around the world. Or the inherent strength of the global system will eventually come back and dominate, he says.

“In the short-term we’ll probably increase the diversity of our supply base, so that we’re not as at risk of a single supplier. But over time, we risk forgetting and going back to where we were until we get another shock, and have to make another adjustment,” Mitchell predicts.

“Perhaps though, some firms may be able to maintain a broader, more resilient supply base. Indeed, some of the strongest firms in the world economy have enough diversification in their supply base that they are less dependent on any one country. Intel, Nike, and Apple are relevant examples,” he adds.

Magesan says he does not see any political will in the U.S. at the present time for universal healthcare and de-privatization, even as a result of the Covid-19 experience.

Bauer believes the Covid-19 pandemic and resulting shutdown experience might prompt the U.S. public to become more receptive to having a national healthcare system. However, he says he knows from having taught in the U.S. university system that the freedom philosophy is deeply ingrained in its citizens. “It may take a generation, but I think having a non-partisan response to this would really help to push things across,” Bauer notes.

Jeff Buckstein, CPA, CGA is an Ottawa-based freelance business journalist. Image by rawpixel.com. This is the third in a series on the COVID-19 pandemic and economic models. Read the full series in order: