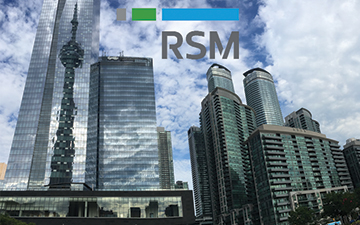 TORONTO, April 18, 2019 – After two years of steady economic growth, Canadians can anticipate a modestly slower rate of growth, according to the first edition of The Real Economy, Canada, a new quarterly publication from RSM Canada. Looking ahead, the primary drivers of growth in 2019 will be modest consumer spending, government expenditures, and an economy bolstered by an increase in business investment.

The Real Economy, Canada, will provide Canadian businesses with necessary economic analysis and insights into what is driving growth in Canada’s middle market and long-term investments that underscore the direction of growth, productivity and living standards in Canada. RSM International launched RSM Canada in late 2017 and, since then, the accounting firm has been building its network across Canada, focused on middle market businesses.

The RSM Canada report predicts a modestly slower rate of growth near 1.8 per cent, down from 2 per cent in 2018.  The lagged impact from the 2014 to 2016 collapse in oil prices is still affecting the economy. Since 2015, the falloff in crude oil prices has reduced the rate of overall growth in the Canadian economy by one per cent.

Countering the decline is the federal government’s investment in science and technology after five years of decline. “Cities are now competing for advanced industries by promoting tech hubs and campuses for advanced manufacturing,” says the report.

“The knock-on benefits to local economies as tech industries establish footholds include: the revitalization of city life; increased tax revenue that can be applied to improvements in infrastructure; increased demand for better education and cultural facilities; and demographic shifts to complement the existing labor force.”

RSM Canada has developed a quarterly index of Canadian financial conditions, using market assessments of risk and accommodation as a proxy for lending and borrowing attitudes. The Canada FCI is an equally weighted composite index of the performance of four asset markets: money market, bond market, equity market and commodity market.

The RSM Canada report claims that the Canada FCI “does an even better job than the BoC survey of anticipating the trends in real GDP growth six-months in advance.”

Says Harry Blum, national managing partner, RSM Canada: “RSM Canada defines ‘the real economy’ as the segment of the economy that produces the goods and services we rely on every day, just as Canadians and Canadian companies rely on the services of our clients on a daily basis.

“Our goal with The Real Economy, Canada is to shine a light on the unique needs and opportunities of this important driver of Canada’s economy and create a clear picture of the notable economic trends and issues facing Canadian business and the industries in which they operate.”

“Resources like The Real Economy, Canada will help guide our clients that are operating in a seemingly unpredictable economic environment, giving them the knowledge they need to be successful in today’s economy,” adds Kotsopoulos.

Rising costs, interest rates a concern as US confidence plunges