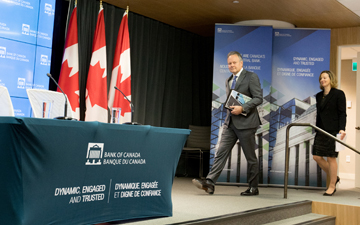 Toronto, January 17, 2018 – While today’s interest rate hike by the Bank of Canada underscores a robust Canadian economy and job market, CPAs are expressing concerns about Canada’s economic outlook, according to surveys published this week by the Association of Chartered Certified Accountants (ACCA) and the Chartered Professional Accountants of Canada (CPA Canada).

According to the Bank of Canada, the Canadian economy is operating “roughly at capacity,” as it raised interest rates this morning for the third time in six months, by a quarter percentage-point to 1.25 per cent. The move follows similar increases in July and September.

In December, Canada’s jobless rate sank to its lowest level in more than 40 years, adding 79,000 net new positions. While the latest numbers are rosy, the Bank of Canada and business professionals are watching NAFTA negotiations closely, as well as historically high household debt. "Uncertainty about the future of NAFTA is weighing increasingly on the outlook," said Bank of Canada Governor Stephen Poloz.

Governor Poloz and SDG Wilkins check out the first bank note sheets with both their signatures. (iSTOCK). (BANK OF CANADA)

According to today’s Global Economic Conditions Survey from the ACCA, more people expect conditions in Canada to worsen than improve, says Jillian Couse, Head of ACCA Canada. “While this might seem surprising, because our economy has performed strongly over the past year, economic headwinds are mounting and growth is likely to slow in 2018.”

The ACCA report notes that debt is now the equivalent to around 170 per cent of Gross Domestic Product — the same as in the United States before the global financial crisis. Housing prices look unsustainable and investment in the property sector is declining.

According to this week’s CPA Canada Business Monitor, based on a survey conducted in Q4 2017, protectionist trade sentiments in the U.S. are viewed as the top challenge to growth of the Canadian economy, cited by 29 per cent of business leaders. Uncertainty in the Canadian economy (12 per cent) comes next, followed by the state of the U.S. economy (11 per cent).

The ACCA notes that, “although there are risks over the future of NAFTA, exports should do well in 2018, helped in large part by strong growth in Canada’s main trading partner, the United States.”

“Canada’s tax system is an essential tool to improve our competitive position, to attract and retain the best and brightest minds, and to support inclusive economic growth,” says Joy Thomas, president and CEO, CPA Canada. “An extensive review will help identify where changes can be made to ensure all Canadians are paying into and benefiting from the tax system in an equitable way.”

Seventy-five per cent of those surveyed also agree the federal government should set a target date to return to a balanced budget. “Canada needs a plan for fiscal stability – a plan that demonstrates leadership and includes a return to budget balance over the medium term,” says Thomas. “Establishing a target date would guide the government’s fiscal and economic planning, instill greater confidence among consumers and investors, create opportunities for growth and enhance Canada’s competitiveness.”

The TN non-immigrant visa has expedited cross-border work for CPAs on both sides of the border. Could Donald Trump hold it hostage?