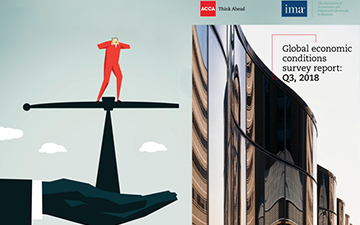 Rising costs, interest rates a concern as US confidence plunges

Toronto, October 15, 2018 – Rising business costs are causing concern among management accountants globally as economic confidence fell sharply in Q3 2018. Confidence in both Canada and the U.S. has dropped sharply and is now at multi-quarter lows, according to the Global Economic Conditions Survey, carried out jointly by the Association of Chartered Certified Accountants (ACCA) and the Institute of Management Accountants (IMA).

Fieldwork for the Q3 2018 survey was conducted in the first two weeks of September 2018 — a low point for NAFTA talks before the signing of the new USCMA — and received responses from 925 responses from ACCA and IMA members around the world, including 89 CFOs.

Confidence in the U.S. is now at its lowest level since the first quarter of 2016. While recent tax cuts have boosted corporate profits and household income, thereby adding further stimulus to the U.S. economy, the effects are expected to be short-lived and may last no further than early 2019.

Meanwhile, rising interest rates and protectionism in the form of tariffs on Chinese goods (and, at the time of the survey, stalled NAFTA negotiations), are seen as a growing threat. That said, “if the Republican Party manages to keep hold of both houses of congress in the forthcoming mid-term elections, the tax cuts could be extended,” according to the report.

“The U.S. economy is still doing very well on the back of tax cuts and general fiscal stimulus,” says Claus Vistesen, Chief Eurozone Economist at Pantheon Macroeconomics. “That’s the headline story in terms of the global economy. “I think headline growth is probably going to come down a little bit next year,” says Vistesen. “But it’s still going to be a relatively strong economy.”

The biggest concern of respondents globally was the rising cost of commodities, especially for oil, which has pushed headline inflation rates up in many countries but augurs well for Western Canada. While unemployment rates are low in Western nations, wage growth continues to be modest.

Forty-five per cent of businesses globally are considering responding to changing economic circumstances by cutting staff numbers or introducing a hiring freeze. Only 18 per cent are considering increasing staffing levels, down from 20 per cent the previous quarter.

Asian business confidence is mixed. South Asia was the most confident part of the global economy in the GECS, while the Middle East and Asia Pacific were the least confident regions. In China, Asia’s largest economy, confidence is now at its lowest level since Q1 2016, due largely to its trade war with the U.S.

The Q3 2018 report contains a cogent thematic analysis of the growing pains experienced by the Belt and Road Initiative (BRI), in Malaysia, Myanmar and Pakistan. Any slowing of the BRI will negatively impact economic growth.

The report asserts that, 10 years after the 2008 Great Recession, the risk of a similar downturn appears “quite low,” due primarily to banking legislation created in its aftermath in Europe and the U.S. (The report does not comment on the potential for weakened legislation in the U.S.) Rising private sector debt in China and rising government debt in Italy are seen as potential threats to global GDP.