Could COVID-19 turn Canadians from debtors into savers? 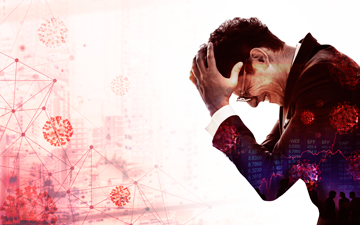 OTTAWA – Could the experience of losing jobs, income, and savings due to the COVID-19 pandemic be a catalyst for Canadians? Could the coronavirus cause some individuals to change their long-term personal finance habits — in terms of savings, consumption and debt — when the economy returns to health?

A crisis like the Covid-19 partial shutdown could lead to consumers becoming much more averse to operating with low buffers or savings, “but I don’t think that’s necessarily the case here,” says Francesco Trebbi, a professor of economics at the University of British Columbia’s Vancouver School of Economics. “There is historical evidence that prolonged crises like the Great Depression created scores of savers and more risk-averse individuals, but I don’t know if this is going to be long enough to do that,” he adds.

“Certainly it’s going to put a spotlight on ‘how much savings did you have?’” says Andy Bauer, an assistant professor with the University of Waterloo’s School of Accounting and Finance. “If you found out that you were working a job that you could no longer go to during the Covid-19 crisis and/or that job was going to be temporarily lost because you couldn’t work it from home and you were one of the unfortunate ones that lost your job, how long could you last?” he asks.

Many Canadians are a paycheque or two away from not being able to cover their bills, “so I think it’s going to make the idea of longer-term savings a lot more salient. You would hope that people would start to balance things out a little bit better and say ‘as much as there are certain things I feel like I really want or need to have, I’ve got to make sure that my safety net is covered first,’” Bauer adds.

The MNP Consumer Debt Index indicates that about half of Canadians are $200 or less away from not being able to pay all their bills each month. “Over the next few months we’ll likely see an unfolding of two crises: the global pandemic and the bursting of the Canadian consumer debt bubble,” said Grant Bazian, president of MNP LTD, in March 2020.

Earlier this month, however, the Office of the Superintendent of Bankruptcy announced that fewer Canadians are seeking debt relief during the COVID crisis. The Canadian Association of Insolvency and Restructuring Professionals (CAIRP) believes that government relief and short-term payment reprieve measures have allowed many Canadians to make ends meet, but consumer insolvencies will spike in the wake of the coronavirus pandemic.

William Mitchell, a professor of strategic management at the Rotman School of Management, thinks the Canadian consumer will fall back into old patterns. Despite the experience of a sudden economic shutdown and, in many cases, unemployment and loss of savings, consumers will, relatively quickly, go back to old habits of emphasizing debt and consumption over saving, when the economy gets back up and running.

Will western governments also turn from debtors into savers? One potential, long-term effect of the pandemic, could be a shift away from building up huge deficits during good economic times. Historically, when countries are going through crises, governments are looked at to provide considerable financial help, which tends to make existing deficits swell.

“If governments are not taking some of the surpluses or inflows that they’re generating and saving it up for a rainy day or putting it into programs that will help people during rainy days, how will they get through these kinds of things?” asks Bauer.

There is also speculation as to what businesses and/or industrial sectors might gain or lose ground in the post Covid-19 economy that emerges, based in large part on how they fared during the partial shutdown.

For example, although medium to long-term changes emanating from this crisis and partial shutdown may adversely impact the cruise ship industry and some other types of tourism, many other industries might end up benefitting from the shock of this event because of cost efficiencies that have suddenly arisen as a result of this new reality, Trebbi notes.

Certain information technology firms, for instance, may receive a boost from the current surge in demand, reaching an efficient scale very quickly. “Even within my own area of higher education, we have quickly moved to online teaching and interaction. This means even students far from Vancouver have been able to attend class and receive feedback with minimal interruption,” Trebbi elaborates.

One clear example of a technology on the rise is Zoom. “All of a sudden a whole bunch of work all over the world is being done almost entirely using this software that a lot of us hadn’t even heard of about a month ago. We are able to connect with other individuals and firms and have business partnerships and so on, without having to meet face-to-face and without having to interact in the same room,” says Arvind Magesan, an associate professor in the Department of Economics at the University of Calgary.

“I think that those types of technologies are going to be hugely profitable in the future because people have seen how much they can do,” he adds.

Mitchell believes that, over the short-term, there might be expansion of some aspects of the health care sector, perhaps with respect to anti-infective safety equipment. “I’d also expect to see more investment in the companies that are involved in vaccine and medical treatment work. So life sciences generally will probably see an uptick,” he predicts.

One potential long-term problem, believes Magesan, is that some firms and industries are going to become more tied to the government as a result of bailouts or subsidies. “I think it’s important to protect jobs and people’s livelihoods, but I worry about governments choosing industries and friends to support,” he says.

Moreover, in the aftermath of this crisis, there will be a lot of consolidation, with big firms buying up smaller firms that weren’t able to survive, thus potentially increasing market concentration and creating oligopoly concerns, Magesan predicts.

The global Covid-19 pandemic is further evidence that we live in an incredibly inter-connected world. In this case the pandemic happened to start in China, and then expanded. But it could have started anywhere and inevitably would have expanded because people travel a massive amount for both business and travel, says Mitchell. “That’s not going to stop,” he adds.

Moreover, Mitchell notes, it is impossible to stockpile all the supplies and services, such as the millions of masks and personal protective equipment gear, that could be required for something like an emergency pandemic in every single location in the world. “But you do need access to the medical services and physical goods. So in a well-functioning world, we would have the ability to access stockpiles that we could share at an international level,” he says.

“Coordination will be a challenge, of course, but this could be a valuable role for multilateral organizations such as the World Health Organization to facilitate, as well as industry consortia of global firms,” Mitchell adds.

Jeff Buckstein, CPA, CGA is an Ottawa-based freelance business journalist. Image by rawpixel.com. This is the fourth and final story in a series on the COVID-19 pandemic and economic models. Read the full series in order: