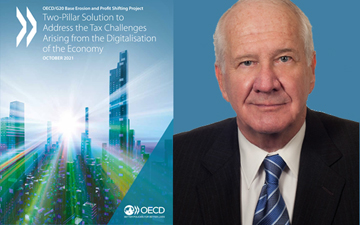 Montreal – On October 8, 2021, in what may prove to be the most sweeping overhaul of international tax rules in more than a century, the Organization for Economic Cooperation and Development (OECD) announced that agreement has been reached on two new global tax measures: a 15 percent corporate minimum tax, and a new rule for allocating a portion of the global profits of technology giants to countries in which their products or services are sold.

The deal was agreed to by 136 countries, including all members of the G20, representing more than 90 percent of global GDP.

The plan is to have both measures ready for signature in 2022, to be effective in 2023 — ambitious targets to say the least. But will either measure actually be implemented? The answer depends in large part on the U.S. Congress, and particularly Republican senators.

A long and winding road

The OECD has been attacking global tax avoidance for several years. In 2015, with the support of all OECD and G20 member countries, it issued a 15-point plan to address “base erosion and profit shifting” (BEPS). The BEPS action plan tried to reign in many tax strategies used by multinational enterprises (MNEs) to shift profits to low-taxed jurisdictions.

The plan had limited success, but the OECD continued its work on two additional measures: “Pillar One” — the allocation of profits earned by large technology companies; and “Pillar Two” — a global corporate minimum tax. It is those two measures that are now very much in play.

The new measures are in a different league than earlier OECD efforts. The OECD estimates that the minimum tax will generate annual global tax revenues of about U.S. $150 billion, and that the allocation rules will transfer taxing rights on more than U.S. $125 billion of profits a year. Finance Minister Chrystia Freeland says the two measures should result in annual tax revenue of C $4.5 billion for Canada.

Most of the buzz is about the first measure — the corporate minimum tax — and with good reason. First, there is significantly more tax at stake from this measure than from the allocation proposal. Second, the tax has a much lower revenue threshold than the second measure and will therefore apply to many more corporate groups.

The minimum tax would apply to multinational corporations with annual gross revenue of at least €750 million, roughly C $1 billion.[1] There are about 300 such corporations in Canada, and Finance Minister Freeland says the tax should generate annual tax revenue of $3.5 billion a year for Canada.[2]

Under the rules, Canadian MNEs with foreign subsidiaries would no longer be able to escape tax on offshore income. Instead, the Canadian parent would include its share of the business profits of a foreign subsidiary in income, and Canadian tax would apply at a rate of 15 percent, with a credit for any tax the subsidiary may have paid.

In short, low-taxed business income of foreign subsidiaries would be taxed at a combined Canadian-foreign rate of at least 15 percent.[3] Canada’s general corporate tax rate is about 26.5 percent, so the new tax will not eliminate global tax avoidance. But it is a new and significant cost, particularly considering that few Canadian MNEs pay tax at anywhere close to the 26.5 percent headline rate, even on Canadian domestic income.

Sounds simple: what took so long?

If a Canadian MNE has annual gross revenue above the prescribed amount, it will have to top-up the combined Canadian-foreign tax on business income of its foreign subsidiaries to a rate of 15 percent. Sounds simple enough: why has it taken so long to finalize the measure?

Well, the rules are not simple at all. A parent company of an MNE group will be taxable in its home country on its share of business earnings of its foreign subsidiaries under the first part of the OECD tax — the “income inclusion rule” (IIR) — with credit for taxes paid by the subsidiaries. In and of itself, that sounds manageable. But the rules do not end there.

There is also an “undertaxed payment rule” (UTPR), which will serve as a back-stop in situations where the ultimate or intermediate holding company is in a country that has not adopted the IIR. The UTPR would either deny deductions or require equivalent adjustments for UTPR taxpayers that make deductible payments to low-taxed entities in the MNE group.

Finally, a “subject to tax rule” (STTR) will allow countries to amend bilateral tax treaties and impose tax on certain related party payments such as interest and royalties that are subject to tax below a minimum rate in the recipient country.[4]

Now you better sit down for what follows. Neither the IIR (the backbone of the minimum tax) nor the UTPR are “minimum standards” under OECD guidelines, meaning none of the 136 countries that have agreed to the rules are actually required to enact them!

Even though adoption of these rules is optional, all G7 countries have actively pushed for the minimum tax, and it is also understood that the European Union intends to implement the tax as a “directive”, which would then require all EU member states to adopt the tax. It therefore appears that there will be broad global adoption of the minimum tax, subject to what the U.S. Congress has to say.

The elephant in the room: the U.S. Congress

The Biden administration, led by Treasury Secretary Janet Yellen, has championed the OECD initiative. But will Congress, and in particular Republican senators, agree?

The U.S. is the only country that already has a global minimum tax, introduced under the Trump administration at the same time it slashed the U.S. corporate tax rate from 35 to 21 percent. The tax applies at a rate of 10.5 percent (50 percent of the general rate) on so-called “global intangible low-taxed income” (GILTI). GILTI will be the U.S. proxy for the OECD tax.[5]

However, where the House proposals go from here is anyone’s guess. If there are no changes to the GILTI rules, many countries may think twice about imposing a 15 percent OECD levy on their own MNEs. If other countries delay implementation of the tax because of U.S. inaction, Canada might well have to abandon the tax for the time being as well, even though Finance Minister Freeland has made it clear she wants to proceed.

The second measure — the allocation of global profits of technology companies

While the minimum tax is complex and its fate uncertain, it is child’s play compared to the second measure — the proposed allocation of a portion of the profits of technology giants like Amazon and Facebook.

Under this second measure, a portion of the profits of MNEs with annual gross revenue of at least €20 billion and profitability above 10 percent (there are only about a hundred such companies in the world) will be allocated to countries in which their products or services are sold, even if they have no physical presence in those countries.[8] The rules and exceptions are daunting, and still being developed.

When finalized and agreed to, the allocation measure will be implemented through a multilateral tax convention as well as changes to domestic law, with a view to the regime coming into effect in 2023.

As is the case for the minimum tax, there is no certainty that the U.S. Congress will agree with the measure: after all, U.S. MNEs are its primary target. And if the U.S. does not come on board, the measure may well be doomed.

The OECD agreement for the allocation measure requires countries that have implemented a digital services tax (DST) to repeal those taxes should this second measure come into force, and states that no new DSTs are to be implemented at this time.

Budget 2021 confirmed the Canadian government’s intention to introduce a 3 percent DST as of January 1, 2022 on MNEs with annual gross revenue of at least €750 million. The Department of Finance says it will move forward with legislation to enact the DST, but the tax would only be imposed if the OECD measure for global technology giants does not come into force. If the OECD proposal is not enacted, the Canadian DST would be imposed as of January 1, 2024, in respect of revenue earned starting January 1, 2022.

I have been practising taxation for 50 years, and this is a first for me: a tax that applies starting on a certain date — January 1, 2022 — but then doesn’t apply at all if agreement is later reached on a totally different approach with a much higher gross revenue threshold. It is not at all clear how digital groups are expected to govern themselves between 2022 and 2024.

A race to the bottom?

Proponents of the OECD initiative say the measures are needed to end the “race to the bottom” on corporate tax rates: low rates that encourage large corporate groups to stash profits in low-tax countries and transfer economic activities and jobs offshore. But there are flaws in this argument.

Second, while it is true that MNEs divert profits to low-taxed countries when they can, these strategies are often aided and abetted by tax rules in the MNE’s home country. The major culprit in Canada is a provision in our tax code[10] that allows tax haven subsidiaries to receive passive income such as interest and royalties from other high-tax subsidiaries of the Canadian parent company without any Canadian tax.

The Canadian government is enthusiastic about the significant amounts of additional tax that the OECD initiative will generate, particularly under the minimum tax. However, high levels of taxation can impede job creation and economic growth, and I leave it to fiscal economists to debate the merits of the initiative.

As for me, I retired from the tax planning game a few years ago when global tax avoidance was in its heyday. My timing could not have been better.

Allan Lanthier is a retired partner of an international accounting firm, and has been an advisor to both the Department of Finance and the Canada Revenue Agency. An earlier, shorter version of this article was published in the Financial Post. Author photo courtesy Allan Lanthier.

FOOTNOTES
1] The tax would not apply to government entities, international organizations, non-profit entities, pension or investment funds, or income from international shipping.
[2] In addition, the minister estimates that the allocation measure would result in annual tax of $1 billion.
[3] The minimum tax would generally not apply to foreign earnings that are already taxed under controlled foreign company (CFC) regimes, including Canadian rules for “foreign accrual property income”.
[4] It is not clear how many countries will decide to apply this rule. The OECD has informed me that a country which signed the agreement of October 8 is expected to include the STTR in its bilateral tax treaties “with developing countries that so request”.
[5] The OECD states that consideration will be given to the conditions under which the U.S. GILTI regime will co-exist with the OECD tax.
[6] Applying GILTI on a country-by-country basis means that losses in one country do not reduce the GILTI inclusion attributable to income in another country. Without this change, GILTI would not be compliant with the framework for the OECD tax.
[7] The House proposals would increase the general U.S. federal corporate tax rate to 26.5 percent, and require a GILTI inclusion of 62.5 percent of foreign income instead of 50 percent. The GILTI rate (before accounting for an exemption based on “qualified business asset investment” and restrictions on foreign tax credits) would therefore be approximately 16.6 percent (26.5 percent multiplied by an inclusion rate of 62.5 percent).
[8] The allocation proposal does not apply to extractive industries such as mining, or to regulated financial services.
[9] Revenue Statistics: 2020 (OECD). The OECD numbers include subnational taxes, meaning provincial and territorial tax in Canada.
[10] Subparagraph 95(2)(a)(ii) of the Income Tax Act.

What is the human cost of revenue losses through tax avoidance and tax evasion?
Thought Leaders

G7 tax deal: if you think multinationals will be forced to pay more, you don’t understand tax avoidance