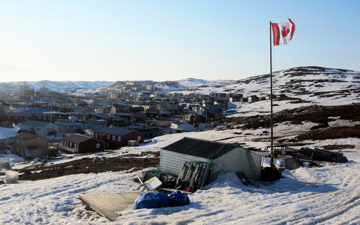 The CRA disputes allegations of Northern Canada service issues, in the first of a three-part series by business reporter Jeff Buckstein

OTTAWA, Aug. 6, 2020 – The Canada Revenue Agency has failed to address many of the unique circumstances and needs facing taxpayers in northern and rural Canada, says the Office of the Taxpayers’ Ombudsman (OTO).

“From the Northern residents deductions to the Canada child benefit, the Ontario Trillium Benefit, and the Canada Pension Plan, these filers feel they receive conflicting information, the processes are unfair and the CRA does not address their unique circumstances and needs,” says ombudsperson Sherra Profit in the OTO’s 2019-20 annual report.

“This general belief leads to reluctance to interact with a system much of the population believes to be systemically oppressive and in turn reduces the likelihood people receive all the benefits, credits and deductions to which they are entitled,” the report adds.

In an interview with Canadian Accountant, Profit says northern residents have told her they believe CRA staff who come from southern areas of the country often don’t understand the difficulties their communities face in trying to access government services, including those of CRA.

People living in the North think “we are so far removed from the centre of government operations that sometimes we feel we’re getting forgotten, or our particular circumstances aren’t taken into consideration,” says Profit, whose five-year term expired in early July 2020.

“The CRA welcomes the Office of the Taxpayers' Ombudsman report and acknowledges the vital role the ombudsman plays in enhancing the CRA’s accountability to taxpayers. We have carefully reviewed the OTO annual report, and have found no evidence to substantiate the assertion of bias towards taxpayers based on background or geographical location,” says CRA spokesperson Dany Morin.

The OTO report listed distance as a key factor for this perceived alienation. Nunavut, for example is described as “a massive, sparsely populated territory of northern Canada [which] spans islands, tundra, stony mountains, and remote villages, all with limited access.” It notes that residents of Cambridge Bay, Nunavut are situated nearly 1,700 kilometres away from Iqaluit, the territorial capital. The closest CRA service counter to Cambridge Bay is located in Yellowknife, Northwest Territories, which is not easily accessible.

Unique languages and lack of connectivity are also identified as major obstacles to the CRA’s ability to provide services that residents in remote locations are satisfied with. The report noted that each northern region “has varying needs as their geographic, cultural and language differences have proven challenges in receiving fair service.”

Nunavut is a unique environment within Canada, says Dan Carlson, assistant deputy minister of Nunavut’s Department of Finance in Iqaluit.

“Our territory’s Inuit heritage and strong use of Inuktut as a first language, including many unilingual Inuktut speakers, combined with limited access to Internet and a limited presence of financial institutions and services in communities, means that approaches to service delivery that may work in other rural, remote or southern communities have to be adapted to ensure they are effective and appropriate for Nunavut’s unique circumstances and needs. This statement applies broadly, and includes the CRAs provision of tax services,” he adds.

One of the main issues is financial literacy because taxes are complicated, and it can be challenging for Canadians to work through the tax system even at the best of times, he notes. This becomes even more challenging when the material is not in the taxpayer’s first language, or where there are no accounting, bookkeeping, tax-preparation firms or even banks that they can walk into and seek advice from, which is the case for many Nunavummiut.

“With this in mind, we would support CRA efforts to help make its services more accessible to Nunavummiut,” Carlson says.

The OTO suggested the CRA make the following improvements to address the reported disparities in these less populated regions, including holding consultations to understand local needs, making available accessible government community services, and having CRA staff engage in culture and language training.

Some factors are beyond the direct control of CRA. For example, lack of high-speed Internet or touch-and-go online service also contribute to the connectivity problem. So does extreme and volatile weather, which negatively impacts both satellite and Internet activity, as well as postal services. The latter is relevant to the CRA and remote communities because when residents don’t have the option of filing returns electronically, they must use paper, says Profit.

“The mail comes and goes on certain days of the week, and if you happen to get storms on those days several weeks in a row, it can severely impact that,” she elaborates.

A push to provide digital services can assist some vulnerable populations. However, this has the potential to further marginalize people in the northern and rural areas of Canada who have more difficulty accessing the Internet for geographic and/or natural phenomenon reasons, such as extreme weather, says Profit.

“We have to try to ensure they are still receiving the same level of services,” she adds.

Jeff Buckstein, CPA, CGA is an Ottawa-based freelance business journalist. Image of Joamie Hill, Iqaluit, Nunuvut, by Aaron M Lloyd via Good Free Photos. This is the second article in a three-part series. Read the full series in order: