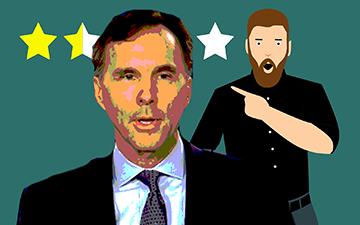 Tax reform, balanced budget off the table for foreseeable future

TORONTO, March 20, 2019 – After signalling its hopes for fiscal responsibility, corporate competitiveness and tax reform, the Canadian accounting profession is expressing its disappointment over the Liberal budget tabled yesterday by Finance Minister Bill Morneau in the House of Commons. Morneau provided no timeline for a balanced budget and projected a 2019-20 deficit of $19.8 billion.

"Canada needs a plan for fiscal stability, one that establishes a target date for a return to balanced budgets over the medium term," said Joy Thomas, president and CEO, Chartered Professional Accountants of Canada. "The government must demonstrate that it has a plan to eventually rein in spending and address persistent deficits, especially with the economic uncertainty facing the global economy today. This would greatly assist in creating business confidence and minimizing the burden on future generations."

Deloitte Canada had called for measures to improve business competitiveness and productivity, “while still supporting the objectives of a balanced budget over time and a gradual reduction in the level of debt to GDP.” But Craig Alexander, chief economist of Deloitte Canada, told the Globe and Mail today that the current deficits are not large.

“I’m not keen on running deficits when you’re 10 years into an economic cycle, but Canadians aren’t concerned and the deficits allowed the government to invest in the priorities they have before the next election," said Alexander, who would prefer a balanced budget as preparation for the next recession.

RSM Canada asserted the budget fell short on global competitiveness. “Budget 2019 was silent on introducing broad-based tax measures expected by middle market companies to relieve global economic pressures, such as United States tax reform and implications of USMCA. [It] did not introduce measures that would lower Canada's personal and corporate tax rates, simplify the complexity of Canada's tax legislation, or reduce the cost of compliance and administration for businesses.”

The absence of a tax reform announcement was lamented by CPA Canada in an otherwise measured response. “This was a squandered opportunity," said Thomas. "There is a groundswell of support for a full-scale tax review in Canada, and a much-needed assessment would pave the way for an improved system that best positions the country for economic and social growth.”

Thomas is hoping that tax reform becomes an election issue. “We hope the platforms of the government and other political parties signal their respective support for a full-scale tax review in the upcoming federal election campaign.”

RSM Canada will be looking for further details and clarity from the federal government. “It remains to be seen what the implications of any future proposals will be to middle market companies and their stakeholders. In the interim, until details on any new measures are released by Finance, middle market companies are faced with uncertainty as they plan their affairs.”

The pre-election budget was largely seen as focusing on the concerns of middle class Canadians and demographic interests rather than corporate Canada. (The fall economic update provided $14 billion in tax relief for Canadian business investment.) Chief among these were changes to the Home Buyers’ Plan, tax credits and investments in training and youth job creation, infrastructure funding, indigenous social service funding, and first steps towards a national pharmacare program.

There was plenty, however, for Canadian accountants to chew over. These included changes to the Scientific Research and Experimental Development (SR&ED) tax incentive program; small businesstax deduction expansion for farmers and fishers; more funding for the Canada Revenue Agency and its aging information technology systems; changes to CRA service delivery; new rules on transfer pricing and the fight against money laundering.

No doubt these will dissected in the days ahead by the profession as the public practice sector answers the inquiries of its clients.