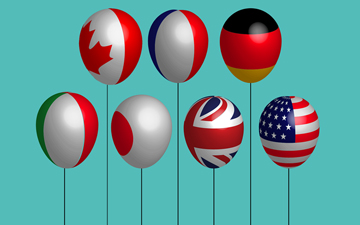 TORONTO, June 10, 2021 – News that finance leaders of G7 countries had agreed last Saturday to back a new global tax rate was hailed in many quarters as “historic” and “unprecedented.” U.S. Treasury Secretary Janet Yellen said the “global minimum tax would end the race to the bottom in corporate taxation, and ensure fairness for the middle class and working people in the U.S. and around the world.”

Media coverage of the agreement, while noting serious obstacles to implementation, has been cautiously optimistic about the plan (although the Fraser Institute urged Canada to reject it). But media reports have also perpetuated a number of common inaccuracies about global corporate taxation, according to some tax experts, due to flawed language and beliefs about the deal.

There is no "global tax payment."

Taxes are levied on a nation-by-nation basis based on domestic tax law, explains Canadian tax lawyer and accountant David J Rotfleisch. Some countries are known tax havens with no income tax charged at all (think Cayman Islands.) Others have set themselves up as low tax rate jurisdictions to attract multinational business (think Ireland).

Further, says Rotfleisch, corporations are free to set up international structures in such a way that minimizes their global tax burdens. The G7 agreement is designed to impose a minimal level of taxation (15 per cent) on corporations based in the "Group of Seven" (Canada, France, Germany, Italy, Japan, the United Kingdom, and the United States).

To the extent that a corporation has set up operations in, for example, Ireland, this agreement would have no effect.

It's not a 15 per cent global tax. It’s an agreement that G7 countries will not tax at less than 15 per cent.

One of the major aspects of the new plan is that multinational giants will be required to complete an amalgamated 15 per cent tax rate in the country where the parent company is headquartered, including for countries where lower rates are paid.

“In other words,” explains David Rotfleisch, “if a U.S. corporation owns a company in Israel that only pays a 10 per cent corporate tax, the U.S. corporation would be required to pay the five per cent tax difference in the U.S. for its Israeli subsidiary, thus rendering the lower tax rate ineffective.

No penalties for non-compliance.

At this stage, a minimum global tax rate is far from becoming a reality, and it may take years to be implemented. The pact really needs the weight of agreement from the G20 and the 139 nations under the aegis of the OECD. Without it, if a corporation has legitimately set itself up in, say, Ireland, there would be no penalties (Ireland is not part of the G7; it is not part of the pact).

Similarly, if a G7 nation fails to ratify the agreement domestically — again, no penalties. The agreement faces an uphill battle in U.S. Congress, for example, which is traditionally slow to pass tax treaties. Expect a long political tussle as Joe Biden and the Democrats hold a thin margin in the balance of power.

The tech companies will fight the plan.

“There is a PR perception problem with multinationals paying little or no tax,” says Rotfleisch. “To the extent that a multinational does not care about ‘the bad smell,’ then they can continue to set themselves up in Ireland or anywhere else that has a lower tax rate.”

There’s no need for a digital service tax.

Au contraire. According to Professor Atul K. Shah of the University of London, part of the reasoning for the new global tax was “the Americans are trying to ward off proposals by countries including the UK, Spain, Italy and India for a separate tax on digital companies. Washington is threatening US$2 billion (£1.4 billion) of tariffs on these countries, pending the outcome of the G7 summit.”

Finance Minister Chrystia Freeland called the pact “good news for Canadians and Canadian businesses,” but vowed to tax tech giants as planned with a new digital services taxes starting Jan. 1, 2022. Says Shah: “The US is therefore hardly a benevolent neutral in this debate [but] its leadership on corporation tax is definitely welcome.”

Everyone is happy with 15%.

Not at all. The original proposal (from Joe Biden) called for a global minimum business tax rate of 21 per cent. Speculation has run deep that, in order to get the U.K. on side, the proposal was lowered to 15 per cent for two reasons: one, to smooth over political relations with Ireland, which has a headline tax rate of 12.5% that is largely responsible for Irish prosperity; and two, to appease the extensive international web of British territories (such as the Caymans, British Virgin Islands, Isle of Man, etc.) that are responsible for 55% of tax losses suffered around the world.

Organizations as varied as Oxfam and the Tax Justice Network say 15 per cent is too low. But finance ministers call the agreement a “starting point.” Indeed, when it comes to tech giants, critics say the agreement is a good deal for the United States, especially if countries like Canada give up on imposing a digital services tax.

Finally, even our own language is slightly misleading, as we’ve been calling the agreement a “pact,” which implies singularity. A “pact” does not quite take into account that what the finance ministers agreed to was a “two-pillar” strategy, as well as some language around sustainability accounting standards and support for developing countries.

The 15 per cent corporate tax rate is actually Pillar Two. The first pillar (“Pillar One”) is that the Pillar Two would only apply on “profit exceeding a 10% margin for the largest and most profitable multinational enterprises.” Critics say the restriction would rule out Amazon, whose profits depend on scale rather than margin. We could have used “framework” instead of “pact” but “pact” is punchier.

Read the full communique from the G7 here. Colin Ellis is a contributing editor to Canadian Accountant. Top image adapted from illustration by AzamKamolov from Pixabay.