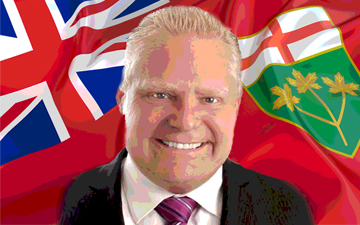 TORONTO, June 8, 2018 – The voters have spoken. So have the accountants. Doug Ford is the new Premier of Ontario and the Progressive Conservatives have won a majority government. With roughly 45 per cent of Chartered Professional Accountants living in the province of Ontario — and the majority of those living in the Greater Toronto Area — only the federal election affects more Canadian accountants than Ontario’s provincial election.

While it’s safe to assume that the majority of CPAs living in Ontario voted for the Progressive Conservatives, the campaign was not a victory for fiscal discipline.

The final nail in the coffin for the Wynne government was its creative Hydro accounting and big consulting fees paid to Deloitte, EY and KPMG. The NDP admitted to a $1.4-billion costing error in its election platform. And the Doug Ford Tories never released a fully costed platform at all. Such is the state of financial probity in Canada’s most populous province.

To say the future is unknown is an understatement. Ford pledged to cut the corporate income tax rate to the lowest in the country, reduce personal income taxes, eliminate the Wynne government’s cap-and-trade carbon reduction strategy, and lower gasoline taxes by 10 cents a litre — a cut that would likely be hidden at the pumps anyway if prices continue to rise.

It’s a platform that largely appeals to the business community, investors and suburban voters who have seen their pocket money dwindle by all the time they spend sitting on the 401.

All this — if it ever comes to pass — will come at the expense of a provincial debt now clocked at $312 billion and climbing. Not only did Ford refuse to release a fully costed program, he provided no path to eliminating the budget deficit, despite his pledge to balance the books by the end of his term.

If Ford keeps his promises, the Tory government will actually run higher deficits than the NDP and Liberals pledged during their campaigns.

Ford has pledged to do a full audit of the government’s books. According to Ontario’s Financial Accountability Office, the province’s total debt could rise to $450 billion by 2025, unless there are drastic cuts in spending. Odds are that the new government will be shocked (shocked, I say!) to find the government’s books in worse shape than anticipated, and crocodile tears shed as the bulk of Ford’s promises are shelved.

Auditor General Bonnie Lysyk, who did so much to expose the creative accounting practices of the Liberals, will be watched very closely for signs that she will hold Doug Ford to the same level of scrutiny as Kathleen Wynne.

Ford himself will come under intense scrutiny. While it’s entirely possible that the new Premier will defy expectations, rise above petty disagreements and family drama, act with integrity and manage one of the largest economies in the world, it’s just as likely that the Ford family soap opera will continue at the cost of any real progress.

The Fords tend to hold grudges and no doubt vividly recall the day in 2013 when CPA Ontario president and CEO Carol Wilding publicly called out Mayor Rob Ford for his lack of leadership. Doug Ford accused Wilding, then the president and CEO of the Toronto Region Board of Trade, of being out of touch with her members. “She may be the president,” said Ford, but “she doesn’t represent the average member of the board of trade.”

The rest of Ontario may soon start to feel the same buyer’s remorse that Torontonians did when they elected Rob Ford as Mayor. Or Americans are now feeling after electing Donald Trump. Populists love a good fight but grow bored with actual governing. That the new Premier has a number of experienced caucus members and recently announced the addition of former Harper Cabinet member John Baird to his transition team should work in his favour.

But four years of Doug’s brother produced little of substance and turned Toronto into an international punch line. Ontario is too important to the national economy for that to happen.

A technical dispute over accounting cost Wynne the election
Profession