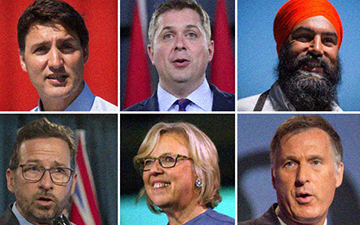 TORONTO, October 31, 2019 – The dust has settled in the Canadian federal election. Liberals learned that Canadians were displeased, even disgusted, with their record. Conservatives learned their platform did not parlay into precious seats in Canada’s most populous province. The Bloc Quebecois, Greens, and NDP learned that most voters support progressive policies. But what did Canadian accountants learn?

In the days leading up to the election, Canadian Accountant conducted the first-ever national political poll in the history of the Canadian accounting profession, surveying Canadian accountants on their election preferences. It’s time to parse those numbers further and highlight key takeaways in light of the election results.

1.  Canadian accountants are at odds with the voting public.

As we reported, six out of 10 Canadian accountants planned to vote Conservative in the election, while just 30 per cent planned to vote otherwise. That number puts the accounting profession at odds with the public, seventy per cent of whom voted for parties pledging progressive policies.

As Andrew Coyne noted in the National Post, the Liberals ceded roughly 30 seats not to the Tories but to parties with left-of-centre policies: the NDP, Greens, and Bloc Quebecois. “It was left-of-centre voters, not those in the centre or right, that administered this rebuke — enough to humble the Liberals but not to remove them from power,” wrote Coyne.

The vast majority of Canadian accountants who planned to vote Conservative have always voted Conservative. They also expressed unconditional support for Tory Leader Andrew Scheer. While other accountants wavered in their historical support of parties and their ideal leader, Conservative-voting accountants told us they were party loyalists.

One Conservative accountant disagreed: “Scheer is a bland, colourless and boring party leader. Trudeau — whom I rate as the most useless and ineffective PM in memory (aside from Clark, Turner and Campbell) should be grateful for being up against such a mediocre opponent.”

3.  Conservative support among accountants was strong in Alberta but also in Ontario.

While the vast majority of Canadian accountants living in Alberta planned to vote Conservative, so did 60 per cent of Ontario accountants, which again was at odds with the voting public. As reported by Maclean’s, the Tories struggled in urban ridings, particularly in the vote-rich Greater Toronto Area (GTA), ironically home to the largest concentration of Canadian accountants. The defeat of veteran Conservative MP Lisa Raitt to a rookie Liberal candidate in Milton was a particularly bitter pill for Tories to swallow.

We allowed students, bookkeepers and other readers to take the poll as well, as long as they self-declared. Most of the students in the CPA program planned to vote Liberal. There was more support for the NDP among students than among professional accountants, perhaps another sign of the future.

In a now-infamous poll of Americans CPAs in 2016, 43 per cent of American CPAs planned to vote for Donald Trump, against 27 per cent who planned to vote for Hillary Clinton. (11 per cent planned to vote Libertarian.) While U.S. CPAs benefitted personally from the Trump election (the passage of the Tax Cuts and Jobs Act made accountants and their firms a lot of money), they also displayed a distinct lack of judgment in leadership qualities.

To its credit, CPA Canada has taken a leadership role on climate change, demonstrating the foresight to take a bold stand on sustainable finance. In August 2019, it submitted recommendations for accelerating Canada’s transition to a low-carbon, climate resilient and globally competitive economy to the House of Commons Standing Committee on Finance. As reported by the National Observer, CPA Canada has also been active in sponsoring opportunities to voice its policy positions to members of the Liberal government, on tax reform and climate change resiliency.

8.  … which puts them at odds with Conservative-voting members.

9.  There is no generational divide in Canadian accounting.

When we crunched the numbers, we found that roughly six out of 10 Canadian accountants planned to vote Conservative regardless of age. (The sample size for ages 18-30 was too small to form an opinion; students in the CPA program would be a better indicator.) Thus, while there is a small gender divide in voting pattern, there is no generational divide.

If you’re a Canadian accountant living in the vote-rich GTA, you learned that your neighbours don’t share your politics. If you live in Alberta, you’re surrounded by like-minded individuals. Will Canadian accountants dismiss the election results, believing that, as the saying goes, “the masses are asses”? Or will Conservative accountants blame the election results on Andrew Scheer, as a leadership review appears likely, using Scheer as a convenient scapegoat?

CPA Canada appears to be on the right side of the future, making in-roads with the party in power, and laying the groundwork for potential tax reform and being part of an ongoing discussion on climate change and the economy.

The economic illusions of the Canadian election

What election tax promises will mean for your wallet