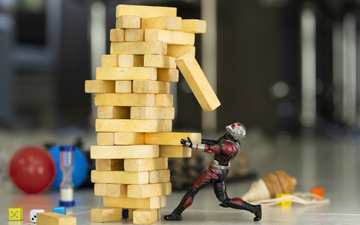 Companies are entering a period of uncertainty at high levels of corporate debt, says Jefferson Frank

LONDON – Markets abhor uncertainty. The coronavirus pandemic is a severe supply shock that will substantially reduce the world’s economic output, and there will potentially be several waves as the contagion returns in the autumn or spring 2021.

Many governments are trying to form a bridge over the lockdown period to allow economic activity to be restored. This involves keeping viable businesses in operation with a furloughed workforce that can quickly re-open when appropriate. One major impediment is that the private corporate debt market is likely to completely implode, which risks pushing a substantial number of businesses over the edge.

Corporate debt is traded on the open market in several ways: bonds issued directly by companies, and bank loans that are sold on to investors by the bank that agreed them, either individually or in packages of multiple loans. Bonds make up the majority of the market.

There are three direct measures of the state of this corporate debt market. One involves credit ratings. The three leading ratings agencies have been downgrading corporate debt at a rapid pace, including big names like Ford and Goodyear.

Ratings agency Fitch is forecasting a doubling in defaults in 2020 on US leveraged loans, which refers to bank loans to businesses considered more risky. The agency expects a default rate of 5% to 6% this year, compared to 3% last year. The dollar value will exceed the previous high of 2009, and for retail and energy companies, the default rate could approach 20%.

Fitch then expects defaults of between 8% and 9% next year in this market, amounting to a total of US$200 billion (£161 billion) in bad debt over two years. Other sectors at risk include airlines, hotels, restaurants, casinos and cinemas.

A second measure of corporate debt is the market price of credit default swaps (CDSs), which are tradeable contracts that investors use to insure against companies defaulting on their debts. Both for investment grade and “junk” debt, the price of these swaps is back at the levels of the financial crisis of 2007-09. It is striking how quickly this has happened.

The final measure is to look at the risk premiums associated with different types of debt. In other words, how much it costs companies to borrow compared to the benchmark ten-year US treasury bond. We have seen spikes in these rates for high-grade corporate debt and junk bonds alike. Both have eased back in recent days, but borrowing costs remain considerably higher than before the crisis. This will be putting pressure on many companies already struggling to cope.

As a general rule, if one company has a negative shock through no fault of its own, even a severe one, it will be able to obtain financing to continue in business. Anyone seeking online deliveries from Ocado will realise, for example, that the company is still suffering logistically from its devastating warehouse fire in England in July 2019, yet it has continued to have access to finance.

It’s a different story if a majority of firms are all suffering shocks at the same time, and the outcome looks as uncertain as it does at the moment. To make matters worse, companies are entering this period carrying high levels of debt. US corporate debt, for example, is over 70% of GDP, much higher than historic levels.

While the markets for trading corporate debt may well collapse, some companies may still be able to borrow privately. During the financial crisis, Goldman Sachs chose not to participate in government bailouts, which came with restrictive conditions.

Instead, the US investment bank went to Warren Buffett’s Berkshire Hathaway in 2008 and effectively borrowed US$5 billion. This created enough investor confidence to allow Goldman to issue new shares on the open market to raise extra capital.

This time around, Berkshire holds about US$125 billion in “cash”, which could be used to strike similar deals. An alternative option for some promising companies will be private equity finance, in which investment firms buy stakes in them.

In some cases, bank lending may also be available: central banks have given continual assurances that the major commercial banks have passed strenuous stress tests, so they will hopefully be in a position to do their jobs and lend.

Yet despite these possibilities, current uncertainties may cause companies in sectors hit hard by the pandemic to be insolvent if they cannot trade for several months. Here, the UK programme on paying up to 80% of wages for furloughed workers is well judged. This should help high street retailers, for example, since they have high wage bills. It will also help these firms that business rates have been suspended.

In contrast, the US government’s US$2 trillion stimulus package seems extremely ill-judged. It includes US$500 billion of business support that is likely to be multiplied by the Federal Reserve buying corporate bonds and offering extra liquidity to American banks by printing up to US$4 trillion in new money. Even the US scheme for supporting furloughed workers is a lot more indirect than the UK version.

The American programme is much more focused on stoking aggregate demand, which is not the answer at this point. If supply falls by 20% because everything from manufacturing to services is hampered by the pandemic, then demand needs to fall 20% as well. Otherwise we risk unleashing inflation. From an economic point of view, the priority must be to ensure that a collapsing corporate debt market does not bring down viable firms and make the crisis even worse.

Jefferson Frank is a professor of economics at Royal Holloway, University of London. Image by Johnny Gutierrez from Pixabay  This article was originally posted in The Conversation UK.

Buckle up for turbulence, says professor of banking and finance law
Business