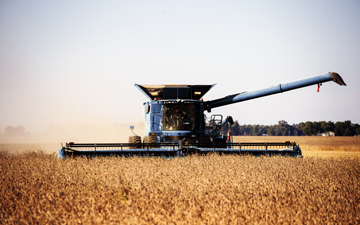 The carbon tax is an indirect but incurred cost, says farm economics professor

TORONTO, April 4, 2018 – When the Pan-Canadian Approach to Pricing Carbon Pollution was announced in October 2016, it was met with passionate responses, from supporters and those in opposition.

Agricultural groups were quick to dismiss the announcement, condemning the federal government for imposing costs on their operations. Farmers in Western Canada were particularly incensed. After investing in zero-tillage practices that sequester massive amounts of carbon into the soil, they were still being forced to pay a tax.

Understanding the likely effect of the tax is of course more nuanced. I’ve spent a significant amount of time on this issue, informing farmers and interest groups in the agricultural sector on what to expect with the new policy.

How much will it cost?

Amid the cacophony of complaint, common themes have emerged. The loudest complaints are understandably economic.

Farmers produce a homogeneous product and sell into an international market. This is a perfect recipe for having zero control over the price to sell their output. This means that any additional costs incurred by farmers — from a carbon tax, for example — are difficult to pass on in the supply chain.

To make matters worse, we’re far from consensus on the extent of those additional costs, especially as the federal backstop (the policy that takes effect when provinces, including Saskatchewan, don’t have their own plan) has only just been implemented.

Farmers are exempt from most of the direct costs with the backstop policy, but indirect costs remain. The costs associated with the carbon-intensive transportation required to get the product to market will likely be the largest, followed by increases in heating expenses and, possibly, fertilizer.

Both sides of the debate tend to bolster their arguments by pointing to British Columbia’s experience with an agricultural carbon tax. When the tax was implemented in 2008, agricultural energy inputs such as diesel were not exempt.

This naturally prompted concern about the sector’s ability to remain competitive with international jurisdictions not subject to the tax — a rational, justified concern. Later, economists Nicholas Rivers and Brandon Schaufele demonstrated that such concerns were likely overblown. Perhaps the study came too late, or perhaps the political power of the farm lobby was too strong to overcome, but in 2014, the sector was permanently exempted from the tax.

Diverging strategies on the Prairies

The bulk of Canada’s agricultural production occurs in the Prairie provinces where carbon tax opposition has been fierce.

Saskatchewan is in the midst of a lawsuit challenging the authority of the federal government to impose such a tax, and several parties throughout the country have taken sides as intervenors in the case.

Alberta, overruling the objections of its farm sector, imposed its own tax in advance of the federal announcement. In designing a custom tax policy, Alberta moved to protect its agricultural sector from the direct costs of the tax while still providing incentives to cut emissions.

This level of flexibility has been removed in the latest iteration of the federal backstop, constraining provinces that have not yet adopted carbon pricing to a much narrower range of choices. Alberta’s system is far from perfect, but does more than the federal policy to reduce agricultural emissions.

Neither B.C.‘s progressive system, the flexible system of Alberta, nor the default federal backstop tax the largest source of agricultural greenhouse gas emissions. In 2016, agriculture accounted for 8.5 per cent of Canada’s emissions, and of that, carbon dioxide only accounted for four per cent.

But a well-understood fact from environmental regulation suggests that an optimal policy induces change at the lowest possible cost. Taxpayers benefit more from greenhouse gas reductions that cost $15 per kilogram compared to those that cost $30.

The current federal policy does not facilitate this lowest possible cost arrangement, nor was it designed to. The idea was for each province to construct a plan suited to its economy and energy generation sources, not to act as a one-size-fits-all for a country as diverse as Canada.

For provinces with large agricultural sectors, the lowest-cost option for reducing greenhouse gas emissions may very well be in agriculture. But the political strength of the sector makes such policies difficult to envision.

Can Canada reach its climate goals without incentivizing meaningful emissions reductions in agriculture? Perhaps in the first few years of the policy. But for the most cost-effective reductions, we need agriculture to play a role.

Tristan Skolrud is an assistant professor in the department of agricultural and resource economics at the University of Saskatchewan. This article is republished from The Conversation under a Creative Commons licence. Image by rawpixel.com.

Why isn’t sustainability a part of accounting training?
Profession