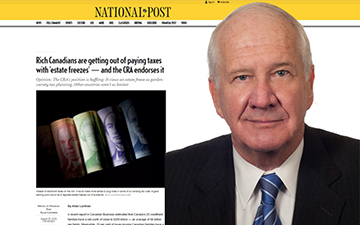 MONTREAL – My recent opinion piece in the Financial Post (Rich Canadians are getting out of paying taxes with 'estate freezes' — and the CRA endorses it), described how wealthy Canadian families are using a sophisticated tax planning technique — the “estate freeze” — to avoid capital gains tax on death.

Reaction to the article was scathing, particularly from small business tax advisors who prefer to frame the debate in terms of small incorporated businesses, such as plumbers and bakers. One reader even stated that eliminating estate freezes “would kill off tens of thousands of family businesses.” Such comments ignore the fact that legislation to close the loophole would likely provide other types of relief for small business. But the controversy invites debate on a broader issue: Should Canada impose tax on death in the first place?

Capital gains tax was introduced in Canada in 1972, as part of a massive overhaul of our tax law. One of the new rules provided for a deemed, fair market value disposition of capital properties on death, unless the assets are left to a spouse or a spousal trust. Bequests to other beneficiaries result in taxation of accrued capital gains.[1] Estate freezes seek to minimize this tax cost.

How does an estate freeze work?

The article in the Financial Post used the following hypothetical example. John is widowed and has three adult children. John owns 100 percent of the shares of a Canadian private corporation (“Canco”). The shares have a nominal tax cost and a value of $10 million. John expects this value to increase to at least $100 million by the time of his death, and he wants to avoid the tax of more than $25 million that would be payable when he dies and leaves the shares to his children.

John therefore implements a freeze. He surrenders his Canco shares for $10 million of new voting, retractable preferred shares. The expectation is that this share exchange will not result in any immediate income tax.[2] His children then subscribe for new common shares, paying a nominal amount. The planning assumes that the common shares have no value today (Canco’s business is worth $10 million, and John owns $10 million Canco preferred shares).

If Canco’s value does increase to $100 million by the time of John’s death, tax of more than $20 million will be avoided. This is because no common shares are transferred on death — the children acquired the shares as part of the freeze. This avoidance is a deferral, not an absolute saving. But the deferral will last until the children dispose of the shares, perhaps on their own deaths 30 to 40 years after the demise of their father.

There are a number of issues to consider in the context of estate freezes. First and foremost, most freezes do not actually work from a technical and valuation perspective. The common shares that are issued on a freeze are said to have no value at the outset, but that is clearly wrong. A hedge fund or venture capitalist would pay a handsome price for the shares: the downside risk is the price paid, and the potential upside is significant.

As a result, the share exchange that occurs as part of the freeze is usually not a rollover: rather, immediate taxes almost certainly arise.[3] The only reason that the estate freeze is considered to “work” is that the Canada Revenue Agency has stated that it will generally not challenge the value of retractable preferred shares in the context of a freeze. As an administrative matter, the CRA therefore does not assess the taxes, penalties and interest that are owing under the Act as a result of the freeze.

With respect to the general anti-avoidance rule (“GAAR”), the CRA said — when the GAAR was introduced — that it would not apply the GAAR to estate freezes, because there is another provision in the Act that may apply to transfers to corporations for the benefit of a spouse or minor children.[4] Again, this administrative position is difficult to defend: the provision cited deals with income splitting, not estate freezing. The CRA misses the point. A gift of capital property results in capital gains taxation,[5] and a freeze is basically a disguised gift that avoids taxation: that is where the mischief lies.

On the other hand, an estate freeze provides some liquidity to Canadian businesses and their owners. If the assets bequeathed on death include shares of a private corporation with business assets, there may be difficulty finding the cash to pay the taxes (with or without a freeze), perhaps forcing a sale of some of the business assets. How important or relevant this liquidity issue is has never been studied or debated. What we do know is that Canadians have been paying capital gains tax on death for close to 50 years, with no reports of calamitous results.

Approaches In Other Countries

Countries take different approaches to taxation on death, including whether capital gains tax should apply versus estate and inheritance taxes. One country to consider — a country with a small open economy much like Canada’s — is Australia.

Australia introduced capital gains taxation in 1985. As in Canada, individuals include 50 percent of any gains in income. However, a significant difference between the two countries is that Australia generally does not impose tax when capital assets are transferred on death.

In Australia, a gift of capital property is a taxable event for purposes of capital gains: surprisingly, bequests on death are not. Instead, the beneficiary acquires the asset at a tax cost equal to that of the deceased, and tax is only due when the asset is sold in future.

The Australian government’s discussion paper had suggested that capital gains be taxed at death, a suggestion that wilted under pressure from the rural and small business sectors. One author notes that the most effective tactic of the lobbyists was to label the new capital gains tax as a “death duty.”[6] The compromise — a different tax result for inter vivos and testamentary gifts — is awkward at best, and difficult to justify.

Unlike Australia, Canada does levy taxes on death. This is consistent with many other countries and represents sensible tax policy. In addition, gifts of capital property result in capital gains tax in Canada. An estate freeze by high net-worth families is a disguised gift and should also be a taxable event.

Estate freezes should be eliminated, and consideration given to introducing other types of relief. For example, capital gains of a deceased might be exempt up to a certain amount. Also, thought could be given to a full or partial exemption for shares of small business corporations, if there is a gift or bequest of the shares to adult children who are active in the business.[7]

Estate freezes are (with no pun intended) only the tip of the iceberg. Canadian tax legislation is in need of major repair. The last comprehensive review of our tax system was carried out in the 1960s, and it is time for the government to appoint a panel of non-partisan experts to undertake a tax reform review of the entire Act.

Allan Lanthier, FCPA, FCA is a retired senior partner of a major international accounting firm. He provided tax planning services for more than 40 years, and was often recognized as one of Canada’s leading tax advisors by the International Tax Review.

[1] If the assets of the deceased include shares of Canadian private corporations, a second level of taxation may apply with respect to the retained earnings of the corporation - taxation that may be addressed by so-called “pipeline transactions,” or by subsection 164(6) of the Income Tax Act (referred to herein as “the Act”). These issues are beyond the scope of this article.
[2] Subsection 85(1) or section 86 of the Act.
[3] See the “indirect gift” provisions in paragraph 85(1)(e.2) and subsection 86(2) of the Act.
[4] Subsection 74.4(2) of the Act. This provision deals with one narrow type of income splitting, and pre-dates the introduction of both the so-called “kiddie tax” and the much maligned new TOSI provisions (section 120.4 of the Act).
[5] Subparagraph 69(1)(b)(ii) of the Act.
[6] Richard Krever; “Tax Reform in Australia: Base-Broadening Down Under”; 1986 Canadian Tax Journal; Canadian Tax Foundation.
[7] Exemption for shares transferred to children who are active in a corporation’s business would be consistent with alleviating changes that the Department of Finance is said to be considering in the context of section 84.1 of the Act — an anti-surplus stripping provision that impedes intergenerational sales of shares of private corporations.

The CRA is sending a clear message that tax evasion does not pay, says David J. Rotfleisch