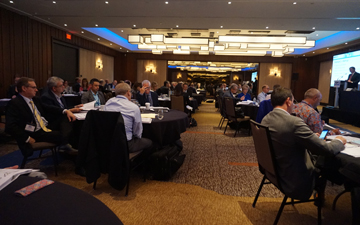 TORONTO – Canadian tax professionals are pushing back against the federal government’s proposed tax changes aimed at business owners. A coalition comprising representatives from the accounting profession, business and public policy groups, and associations representing stakeholders met in Toronto on August 17 for a special symposium on the taxation of private corporations and shareholders.

“We felt that it was necessary to hold the forum to examine the proposed rules on income splitting, succession of the family business, and that the best way to do that was to convene experts in taxation, and industry leaders,” explains Michael Cadesky, FCPA, FCA. Cadesky is the managing partner of his own tax firm and chair of the CPA Canada tax committee for small and medium-sized enterprises. He is also the co-chair of the public policy committee of the Canadian Society of Trust and Estate Practitioners (STEP Canada), which organized the event.

“CPA Canada representatives attended the symposium because it provided a valuable avenue for dialogue among the various stakeholders in this consultation process,” says John Fenton, manager of media relations at the national accounting body, which is planning to make a submission to Finance Canada on the changes.

Fundamental among the coalition’s criticisms is the narrow window of the government’s consultation process. “The process of having a 75-day consultation on rules that already seem to be drafted with implementation dates … we view as problematic, particularly in the middle of the summer holiday season.” There is not enough time to engage, says Cadesky, in “what is probably the most fundamental tax reform to private company taxation since 1972.”

Cadesky believes the government has “misjudged” the complexity of the proposed changes as well as their ramifications. “I don’t think that they anticipated that the rules would get this amount of publicity, criticism and controversy.” Further, the proposals amount to “We will tax it this way or we will tax it that way. Not taxing it all — leaving it the way it is — is not an option.”

In announcing the consultation process, Finance Minister Bill Morneau specified the “pressing issue” of Canadians using a corporate structure to “shield their income and to gain a tax advantage.” According to Morneau, “private corporations are making up an ever growing share of our GDP, doubling in the last 15 years.”

Cadesky says STEP takes issue with all the proposals, because they are integrated. “If you take out one of the linchpins, the rest don’t stand on their own. It begins with the income splitting rules and progresses from there.” The group would rather that the government engaged in a constructive, meaningful way, and looked at the entire tax system, rather than in a piecemeal fashion.

Succession of the family business, however, is the “central theme” and the issue of most concern. According to Cadesky, the government’s proposals create an unfair, large incentive to sell one’s business to an arm’s length company, rather than pass it down to children, typically through a deferred income plan.

By its own calculations, STEP estimates that, on a $6 million sale, there is over a million dollars of tax difference between transferring a business to an arm’s length company rather than to children. This would affect traditional businesses such as the family farm; representatives of both the Canadian Federation of Agriculture and Ontario Federation of Agriculture attended the symposium.

Tar and feathering the tax profession

“The Government is committed to increasing the fairness of the tax system, while ensuring that the system is competitive and supports growth,” says David Barnabe, senior media relations and consultations officer at the Department of Finance Canada.

“Canadians' views will be taken into full consideration as the Government moves forward to address the issue of tax planning using private corporations.”

But Pamela Cross, the national deputy chair of STEP Canada, and a partner at Borden Ladner Gervais, takes issue with the government’s stance. “The government has framed this issue as simply closing loopholes for the very wealthy and ensuring the tax system is ‘fair.’ In fact, these proposals will adversely impact many business owners and their families who consider themselves squarely in the middle-class and who do not have the financial safety net available to employees.”

Even if there was a working definition of “the middle class,” says Cadesky, the majority of small business owners are middle class. “These people are not super-rich. Many of these businesses are working to provide a living income for their owners — dry cleaners, coffee shops, trucking, trades. What is appropriate is that the system treats them fairly in their circumstances. These rules are highly discriminatory.”

“There has been a lot of attention given to people who don’t pay their fair share of tax,” says Cadesky. “There’s certainly some evidence that people have taken advantage of attractive tax arrangements. But in terms of it being commonplace in the day-to-day practice of the average Canadian accountant or lawyer who specializes in small business and private companies, this is not something they encounter.

“They’ve taken a very, very wide brush to essentially tar and feather everyone.”

The symposium “validated the concerns that STEP had with the proposals,” summarizes Cadesky. “Many of the other organizations had done their own analysis, which came to similar conclusions. We were very much aligned with what other industry groups and professional associations felt. We weren’t taking a maverick position.”

The full-day discussions ended with a summary of conclusions that will form the framework of multiple submissions to the Department of Finance.

Colin Ellis is the editor-in-chief of Canadian Accountant. Photo courtesy of STEP Canada.

Welcome to the black money, underground economy of the construction sector. My cottage can wait for an honest worker
Opinion

Breaking the VDP when it doesn’t need fixing