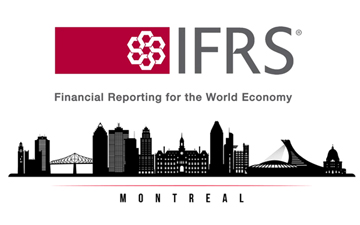 TORONTO, Nov. 7, 2021 – Montreal has been selected as one of three global hubs of a new global disclosure standards body called the International Sustainability Standards Board (ISSB). Despite months of intense lobbying from the Canadian government, accounting profession and banking sector, the International Financial Reporting Standards (IFRS) Foundation, which is based in the London, England, awarded the new ISSB headquarters to Frankfurt, Germany.

Montreal, however, will be play a leading role in the new body, responsible for key functions supporting the new Board and deeper co-operation with regional stakeholders. Offices in San Francisco and London will also provide technical support and platforms for market engagement and deeper cooperation with regional stakeholders. A future office for the Asia Oceania region has received proposals from both Beijing and Tokyo.

According to the IFRS Foundation, it will engage “without delay” with Frankfurt and Montreal to make the necessary arrangements to enable the ISSB to commence work early in 2022. “Selecting Montreal to host an office of the new international Board demonstrates that the IFRS Foundation recognizes this country’s strong commitment to sustainability governance, something showcased by the extensive support behind the Canadian bid,” stated CPA Canada President and CEO Charles-Antoine St-Jean in a press release.

“It is a significant achievement and we look forward to seeing Canada’s role evolve as the ISSB takes shape. The IFRS Foundation has clearly signaled its trust in Canada helping the ISSB establish a global footprint.” Continue St-Jean: “Canada has a proven history of being an engaging and effective facilitator when it comes to bringing various parties and diverging views together to reach a consensus or in finding a path forward.

“In this context, Canada is well positioned to engage with developing and emerging economies, which the IFRS Foundation has acknowledged will be an important priority.”

Pressure on as ISSB greeted with cynicism, distrust

When the decision by the IFRS Foundation was announced, the Globe and Mail (which published CPA Canada Op-eds and articles touting the ISSB) led with the headline, Canada loses bid to host corporate sustainability data office to Frankfurt at COP26, but gets a secondary hub. The Globe positioned the Montreal hub as a “consolation prize” and a “secondary office.”

The reporting missed the larger context of European progress on climate change issues — far ahead of progress in North America — as well as the European centrality of progressive legislation and enforcement in banking and securities bodies. Montreal, despite having the third highest concentration of international organizations in the Americas, had little chance of winning the bid to host the seat of the Board and the office of the Chair. That Montreal will play a leading role in the establishing of the new ISSB footprint is a significant accomplishment.

(The comments section of the Globe and Mail article was overwhelmingly negative, a mix of anti-Trudeau sentiment, cynicism over the significance of the announcement, and anger at the perceived mistreatment of Alberta and the oil and gas sector. The comments demonstrated ignorance over the role of the international bodies and the significance of accounting and disclosure standards. The new ISSB hub — and the Canadian accounting profession — will need to engage in a public relations campaign to educate the broader public as to the mandate of the Montreal office.)

At the same time, the ISSB will be under pressure from key stakeholders such as the London-based Institutional Investors Group on Climate Change, an industry coalition of more than 360 European institutional investors and asset management firms. The group recently warned the Big Four accounting bodies that, if they do not improve the climate risk disclosure at the companies they audit, it will oppose their future audit engagements at company AGMs.

The global umbrella body for securities regulators, the International Organization of Securities (IOSCO), which helped set up the ISSB, says it is taking a principled stand against corporate greenwashing. "We are really focused on greenwashing," said Ashley Alder, chair of IOSCO. "It's super important, and if you don't have basic information on a globally comparable basis, then you increase the risks of greenwashing enormously." IOSCO is considering a possible assurance framework to ensure rigorous checks on whether the ISSB standards are properly applied by companies, reports Reuters.

“We are thrilled Canada will host one of the central offices for the ISSB and grateful to be recognized for our country’s diverse and strong talent, financial sector expertise, and climate leadership,” said Deputy Minister Chrystia Freeland when the announcement was made. “When it comes to sustainability in the financial sector, now more than ever, the world needs consistent, comparable global reporting standards.

The ISSB will be tasked with creating a set of global sustainability standards. The new body, which will sit alongside the International Accounting Standards Board (IASB), will complete consolidation of the Climate Disclosure Standards Board (CDSB—an initiative of CDP) and the Value Reporting Foundation (VRF—which houses the Integrated Reporting Framework and the SASB Standards) by June 2022.

“The ISSB and its new Montreal offices will be the global sustainability disclosure standard setter,” said Freeland. “The new ISSB will create good jobs here in Canada and accelerate growth in the green economy, at home and around the world.

“I want to congratulate the many partners who helped to bring this group together. Canada looks forward to working with the IFRS Foundation and our international partners to stand up the ISSB, without delay, and begin the important work of setting global sustainability standards.”

Roughly $75-trillion of assets already support SASB standards. “If the ISSB’s future standard meets IOSCO’s expectations,” stated IOSCO Chairman Ashley Alder, “our endorsement will support all our 130 members in considering ways they might adopt, apply or be informed by the standard.”

An increasing numbers of investors depend on ESG information from third parties for their investment decisions but are the rankings meaningless?
Thought Leaders

What is sustainability accounting? What does ESG mean? We have answers