Does Canadian accounting suffer from groupthink? 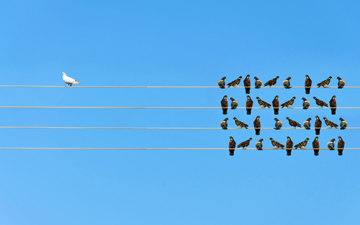 The expression “birds of a feather flock together” is especially significant at this time for users of financial statements, regulators, auditors, corporate directors and accountants. Psychologists and psychiatrists have long addressed the shortcomings of human resistance to diversity, alternate or opposing points of view. Adhering to false beliefs should be avoided wherever possible, especially in the accounting profession, which I believe suffers from “group think,” a psychological phenomenon that occurs in which the desire for harmony or conformity in a group results in an irrational or dysfunctional decision-making outcome. Auditors and lawmakers currently suffer from this unwise behaviour; the very reasons for the century-old foundational existence of financial reporting have been abandoned in Canada.

Familiarity, unfortunately, reinforces people’s tendency to believe that they are “doing the right thing.” When others who are associates are thinking and behaving like you, further “oneness” of behavioural reinforcement occurs. Brainwashing is amplified when those around you “spout the party line,” despite blatant defects and restrictions that are obvious to others. All of us carry such favourite ideas and biases, according to plentiful psychologist research.

In the 1990s, Canada’s auditors embarked on a supposed new, but destructive, path of adopting choices that repeatedly appeared then and now to lack wisdom. Student auditor training, for example, abandoned 30-plus previous years of attempting to link user decision needs to information reporting. Showing students the worth of one or maybe two accounting choices over various others helped to provide greater auditor information value for readers of financial reporting. Financial reporting thus had a clear purpose prior to the 1990s; it was primarily for investor and creditor decisions and evaluations.

Simultaneously, to make matters worse for the future of financial reporting, accounting magazines and literature in Canada avoided criticisms and debates about emerging or growing financial issues and concerns. Bland articles were published heaping praise upon trivial matters, such as terminology. Frequent advertising displayed images of glamorous audit students flying in helicopters and holding important roles. The downside of such glorified misrepresentation was not even debated. Why? No analyses or objections from accountants and auditors occurred in Canada. “Team player” attitudes were being cultivated, thereby excluding those having constructive evaluations and fresh ideas.

The combination of robot-like on-the-job training directly conflicted with misleading student recruiting ads. Lurking in the background was a peculiar desire to increase the numbers of registered accountants, mainly for political lobbying purposes. The number of students passing entrance examinations significantly increased. The behavioural narrowness flied in the face of diverse dialogue and thinking that could attract “new blood” with worthwhile ideas for a changing future within business. Canadian auditors simply ignored fundamental research available in other disciplines, such as in psychology, and repeated their quickly aging 1990s agenda. Hiring the person who looks and behaves like you is always a serious mistake.

The 1990s-type of students constitute many of the audit partners of today, quite possibly lacking the background needed for the challenges of tomorrow. Canada’s strange adoption of ill-conceived IFRS is but one frightening example of an unfathomable impulsive decision, contrary to available research at the time. Disclaiming responsibilities in Court for having signed misleading audit reports is yet another short-term decision with deep long-term downsides. A role in society for external auditors quickly diminished because what was stated in published auditing standards was denied in Canadian courts by auditors.

Those who disagree with some of the themes in this article can easily test the intellectual strength of auditors and accountants in Canada. Pick a couple of sentences from this column involving inflexibility and read them to your colleagues. A quick rejection could easily demonstrate no more than mirroring your hasty opinion or it could demonstrate an unwillingness to consider any worthwhile counter-opinion.

If such intolerance indeed exists, might the accounting and auditing industry in Canada be in quick need of new leaders? Such people should be willing to acknowledge that auditors could be making serious long-term mistakes. Demanding loyalty from subordinates to support dangerous IFRS is only one example of encouraging increasing disrespect for financial reporting. Must a continued “cover-up” and another costly Nortel-like financial crash have to occur in order to wake up lawmakers and auditors?

As those of you who follow my column well know, I believe that IFRS encourages swindling. Most IFRS-based financial statements in Canada today are confusing, uninformative or misleading for investor decisions. Auditor reports, all too often, should not be signed, based on the standards that existed in the 1970s. Obviously, progress is not being made, contrary to what auditors are proclaiming in Canadian courts. Supporting ill-founded current reporting concepts, merely to spout the party line, does not bode well for the future.