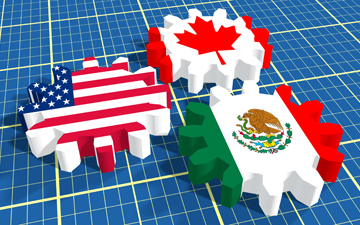 OTTAWA, Sept. 29, 2017 – As the third round of NAFTA talks wound up on Wednesday, Canadian accountants are wondering just how much damage Donald Trump’s “America First” rhetoric will wreak on cross-border business.

Chartered Professional Accountant Nino LaDuca is president of Tech-Con Automation in Burlington, Ontario, which develops advanced manufacturing and robotics process solutions. About 80 per cent of Tech-Con’s annual revenues consist of exports to the U.S., so any alterations to the NAFTA could greatly affect Tech-Con and its 72 employees, says LaDuca.

He is concerned that changes to labour mobility could have the biggest impact on his firm, which is part of the Shape Technologies Group, headquartered in Kent, WA. Employees within that group constantly move between Canada and the U.S.

“It’s tough enough for our people to get across the border now to do the work that we need them to do. [For] a lot of the solutions that we build or develop, we have our own skilled labour force that understands that equipment [and] that solution,” explains LaDuca.

Some of Tech-Con’s suppliers are also having a difficult time crossing the border to visit Tech-Con. “Putting up more hurdles to get people to cross the border would just have a negative impact on our company,” says LaDuca.

“I think there is great opportunity to improve NAFTA for all three countries. A lot of good can come from sitting down very productively at the table, and asking about what improvements need to be made so that the agreement works better for everybody,” Todgham Cherniak adds.

What are Washington’s intentions?

News from the talks has not been good, however. At this week’s conclusion of the third round of talks, Foreign Affairs Minister Chrystia Freeland Freeland, called the current U.S. administration “unconventional” and “overtly protectionist.” More ominous is that the U.S. has not clarified what it wants from a new NAFTA; while Freeland said she believed the U.S. is bargaining in good faith, it has not declared a formal position that could facilitate negotiation.

Certain aspects of the NAFTA agreement, however, have been flashpoints for disagreement.

The U.S. is pushing to have the Agreement rewritten with respect to the rules of origin, which determine whether goods are originating in a NAFTA party. The U.S. wants the rules to provide greater domestic protection in several areas, including for its farmers, softwood lumber industry and auto industry and, therefore, wants to amend the rules of origin, notes Todgham Cherniak.

But what about the workers at Tech-Con? LaDuca reports that staff on both sides of the border are having trouble crossing. Is it about to get worse?

With respect to labour mobility, Todgham Cherniak notes that Canada agreed to more progressive labour cooperation than currently exists under NAFTA, when it signed on to the Canada-European Union Comprehensive Economic and Trade Agreement (CETA) in 2014, as well as the Trans-Pacific Partnership (TPP) in 2015. The TPP signatories also included the U.S. and Mexico, although the U.S., under President Trump, has since indicated it will pull out of the TPP.

“I think that a labour chapter can be added to NAFTA so the current labour side agreement — the North American Agreement on Labour Cooperation that was signed at the same time as NAFTA — becomes a chapter of NAFTA in a modernized form,” she says.

There could be scope for modernization under labour mobility, says Brian DePratto, a senior economist with TD Economics in Toronto.

“That list is fairly out of date, so that may be an area where you could see improvement. The job titles included reflect the time the agreement was struck. For instance, areas such as user experience design and similar software related work were nascent. Explicitly including new job types that fit within the spirit of the original agreement would make a lot of sense,” he elaborates.

Will NAFTA be put on hold?

“One thing that is worth noting in terms of the Canadian economy vis-à-vis the U.S. is just how much more reliant we are on trade,” says DePratto. “A significant fraction of Canadian output — about 32 per cent of GDP  —  is exports. And of that, the U.S. is about 80 per cent. So roughly one in four dollars is directly attributable to the U.S.”

Even if Canadian businesses aren’t directly exporting, chances are they’re probably somewhere along that supply chain for an exporter, he adds.

More than 20 U.S. states list Canada as their top international trading partner, and so part of the Canadian strategy is to focus on emphasizing that individual U.S. states have significant Canadian operations and that there is an integrated supply chain, notes DePratto. For example, some southern U.S. manufacturing states have a fairly large Canadian presence in auto parts and other industries, he says.

That’s certainly true at Tech-Con, which was instrumental in the rebuilding of Appliance Park, General Electric’s massive manufacturing facility in Louisville, Kentucky. Under LaDuca’s stewardship, Tech-Con contributed to the “re-shoring” wave of companies like General Electric, which began bringing overseas manufacturing back in recent years to the U.S.

All indications are that NAFTA discussions will not be a quick process, driven at least in part by politics, says DePratto, who notes that Mexican presidential elections are occurring in 2018, with an unpopular Mexican government anxious not to appear weak in discussions with a much disliked Trump Administration.

“If nothing is done by early 2018, then most likely you won’t see an amended agreement put in place until maybe early 2019 or thereabouts,” he predicts.

Jeff Buckstein, CPA, CGA, is a freelance business journalist based in Ottawa.

With proposed U.S. tax reform looming, we look at the options and their ramifications for Canadian business