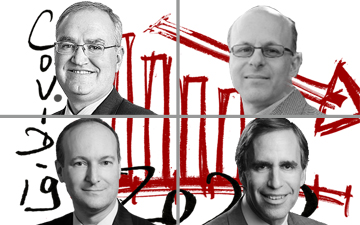 In part two of our five-part series, why the current economy compares favourably with more recent economic crises

OTTAWA, Nov. 20, 2020 – As Canada struggles to contain a second wave of COVID-19, governments at all levels are weighing the economic costs of further business and social restrictions. In part one of our five-part series, we looked at the similarities between the Great Depression and the current pandemic, resulting in massive deficit expenditures and a willingness by the federal government to incur as much debt as needed to confront an enormous problem.

But in the aftermath of the Second World War, multiple economic factors, fuelled by decades of pent-up demand created by the hardships of depression and the sacrifices of war, led to a booming economy for the better part of three decades.

A key difference between then and now is that provincial government debt and household debt are much higher. The first credit card — Diner’s Club — emerged in 1950. It wasn’t until the 1980s that credit cards like VISA and Mastercard started becoming popular, says Dimitry Anastakis, L.R. Wilson/R.J. Currie Chair in Canadian Business History for the Department of History and Rotman School of Management at the University of Toronto.

Now, “we’re kind of tapped out,” asserts Anastakis. “Canadians are not going to buy government bonds like they did in the Second World War — especially when interest rates are so low,” he notes.

The underlying economic and demographic conditions are also much less favourable.

“The sad reality is that the trend rate of growth in the Canadian economy is going to be significantly slower than in the past because the aging demographics haven’t changed,” says Craig Alexander, chief economist with Deloitte Canada in Toronto. Moreover, with productivity growth slowing in recent decades, the sustainable rate of annual economic growth in Canada has gone from around 2.8 per cent in the 1990s down to about 1.7 per cent pre-COVID, he notes.

During this pandemic year, the Canadian economy is expected to contract by about 5.5 per cent. But had the federal government and provinces not intervened with the fiscal response they did, it would have been much worse, with the economy probably contracting by about 20 per cent, says Alexander.

“We just don’t have the same potential growth that we had in the late ‘40s and the ‘50s,” notes Douglas Porter, chief economist at the Bank of Montreal in Toronto. “There isn’t the rebuilding. There isn’t the long-lasting, pent-up demand. I don’t believe there is the potential for huge productivity gains.”

The two main building blocks in GDP growth are labour force growth and productivity growth. Says Alexander: “I’m not especially optimistic on either front in the years ahead.”

Rather than comparing Canada’s current financial status during COVID-19 to the Second World War, some experts believe a more apt comparison can be made to more recent circumstances when the country has run elevated deficits.

For example, compared to the Great Recession of 2008, today’s deficit is much larger, says Avery Shenfeld, managing director and chief economist of CIBC World Markets.

But Canada is in better shape compared to the mid-1990s, when the country’s federal debt-to-GDP ratio was at about 70 per cent following more than 25 consecutive years of deficit spending. Financial markets were deeply worried about Canada’s fiscal situation, and the Wall Street Journal referred to the Canadian dollar as the “northern peso,” recounts Alexander.

Between fiscal 1997-98 and 2006-07, successive Canadian governments ran annual surpluses —  two of which were in excess of $10 million, with much of that being applied to federal debt to reduce roughly $100 billion off the books.

The real measure of whether there is a squeeze on government activities is how big the government’s interest bill is relative to total annual revenues, says Shenfeld, who notes that the federal government doesn’t need to pay off its debt, and can keep rolling over maturing bonds, so the annual cost is simply the interest it owes.

Moreover, he notes, Ottawa has opted for long-term protection, locking in more of its new debt in longer term bonds, shielding it from increases in interest rates in the next few years.

“In point of fact, we could go up another 20 points in terms of the debt-to-GDP ratio,” says Alexander. “If the government did the same magnitude of stimulus again we would get to the debt-to-GDP ratio that we had in the mid-‘90s. But even then I don’t think it poses the same risk for the simple reason that, in the mid-‘90s, the Government of Canada was paying about nine per cent on debt, whereas today they can issue a ten year bond at 60 basis points,” notes Alexander.

“If you’re borrowing at 0.6 per cent you can carry a lot more debt than if you’re paying nine per cent like in the ‘90s,” he elaborates. “When a country gets to about 100 per cent you really start to worry.”

Warns Shenfeld: “Certainly in the here and now there’s some elbow room to do this for at least a year or two. But we can’t run these kind of deficits year after year because, when the economy gets better, interest rates will surely be heading higher.”

Another mitigating current factor is that almost every major economy in the world has faced a significant deterioration in their fiscal finances as a result of COVID, and so there has been no pressure on the Canadian dollar, or our bond market, says Porter. Moreover, Canada’s rising debt-to-GDP is in line with other countries.

In part three of our four-part series, we take a deeper dive on potential roads to economic recovery—including the thorny issue of taxation.

Jeff Buckstein, CPA, CGA is an Ottawa-based business journalist. This is the second article in a five-part series. Read the full series in order:

There is no magic money tree in economics, says Anton Muscatelli
Thought Leaders