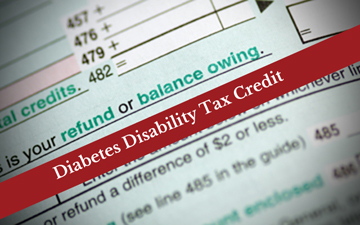 OTTAWA, Jan. 23, 2018 – Canadian accountants have questioned why the Canada Revenue Agency would change and then reverse the way it assesses how diabetics qualify for the disability tax credit (DTC). “The adjustment was made so that the CRA would have the explicit documentation from medical practitioners,” explains CRA spokesperson Karl Lavoie.

Revenue Minister Diane Lebouthillier subsequently asked the CRA to review the changes that it made to the clarification letter for life-sustaining therapy that was adjusted in May 2017. Now, “after looking into this, the CRA acknowledges that consultation with a range of stakeholders would have provided us with important insights and considerations that could have helped inform us on how to improve the clarification letter,” says Lavoie.

“Over the past number of months, some diabetes associations have raised concerns about how the CRA has been processing diabetes-related DTC applications, many of which fall under the life-sustaining therapy category,” he acknowledges. The CRA is wholeheartedly committed to ensuring that all Canadians receive the credits and benefits to which they are entitled, including the DTC, Lavoie says.

The CRA also announced the reinstatement of the Disability Advisory Committee (DAC), which was originally formed back in 2004, but then disbanded in 2006. Lavoie says the DAC and CRA will work closely together “to review CRA’s administrative practices and assess next steps with regard to improving the Agency’s administration of its programs for Canadians with disabilities to ensure they are as accessible as possible.”

“We see what they’ve done as being effectively a tacit acknowledgment that they made a change that had, at a minimum, unintended consequences of blocking adults with Type 1 diabetes from this program, and an agreement to go back to those pre-May practices while the newly reinstated Disability Advisory Committee studies the matter,” says Kimberley Hanson, director of federal affairs for Diabetes Canada in Ottawa.

Diabetes Canada had recommended having the DAC reinstated as this tax credit issue arose affecting individuals with diabetes. “We realized there was no oversight process or mechanism to require the CRA to check what the implications of making certain changes to their internal procedures would be on certain stakeholder groups,” she notes.

Hanson believes public pressure was critical in getting CRA to revert back to the pre-May 2017 clarification process.

“There is no way we would have heard what we heard from the CRA on December 8 had we not had so much support from not just the community of people living with diabetes, but from people who don’t live with diabetes themselves but who saw that this was wrong and who reached out via their MPs in many cases, or personally to express that,” she says.

“I’m really gratified to see how Canadians came together on this issue, and I think under the circumstances that it really caused us to get to what I’m hoping is an effective outcome much sooner than we otherwise would have,” Hanson adds.

More than a 14-hour commitment

Section 118.3 of the Income Tax Act states that a taxpayer could qualify for the DTC credit for mental or physical impairment if their “ability to perform a basic activity of daily living is markedly restricted or would be markedly restricted but for therapy that … is required to be administered at least three times each week for a total duration averaging not less than 14 hours a week.”

Blood sugar testing has to be done between six to ten times daily, with each occurrence taking about five or six minutes. Patients need to dose/take insulin about five times a day, depending on how well controlled the disease is, which takes roughly eight minutes each time to wash their hands, cleanse the site, calculate the dose, draw it up, and administer it.

Furthermore, “people with diabetes often have to check to ensure that we’re not producing ketones in our urine or our blood. We do that on average once a day. That’s [another] five minutes,” says Hanson. All of this adds up to more than two hours a day, and therefore 14 hours a week, Hanson contends.

“Type 1 diabetes is sort of a silent disease in a lot of respects, in the sense that you can look at a lot of us who live with it and never realize that we are ill. Many of us work, have productive working lives, raise families, contribute to society. So it’s not a disability like some that might really limit somebody’s ability to be in the workforce, etc.,” notes Hanson.

“However, there are a lot of people with Type 1 for whom the disease is so challenging, or the complications are so severe, that it does make working very difficult. Moreover, even for those of us who are able to work, the bottom line is managing this disease takes an inordinate amount of time and energy out of each and every day. There are no days off; no reprieve. It wakes you up in the middle of the night, every single night. You can’t let it go — ever.”

Tomorrow, a Canadian accountant on the cost of living with diabetes. Jeff Buckstein, CPA, CGA, is an Ottawa-based business journalist.