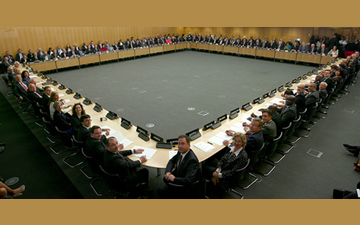 TORONTO – The war on international tax avoidance schemes passed a milestone today at the signing of a multilateral tax "super-treaty" by members of 68 jurisdictions including Canada. Eight more countries, including Russia, have indicated an intention to sign the agreement. The U.S., as expected, did not sign the agreement.

"We are about to make tax treaty history," proclaimed Angel Gurría, secretary-general of the Organisation for Economic Co-operation and Development (OECD), at the signing in Paris of the Multilateral Convention to Implement Tax Treaty Related Measures to Prevent Base Erosion and Profit Shifting (BEPS).

"The Convention puts an end to treaty shopping and will provide taxpayers with greater certainty through improvements to the mutual agreement proceedings," said Gurría. It is the first agreement of its kind intended to reduce double taxation and also nontaxation through tax evasion or avoidance by multinational enterprises.

Said Gurría, "Crucially, it goes to the heart of our efforts ... to help restore citizens' trust in the fairness and transparency of global governance systems."

Ginette Petitpas Taylor, the Parliamentary Secretary to Minister of Finance Bill Morneau, joined representatives to sign the treaty. It is expected to modify many of Canada's tax treaties by transposing the results from the OECD/G20 BEPS Project into existing bilateral tax treaties.

According to the Finance Department, "taking action against tax loopholes is a way to instil confidence in Canada's tax system and drive economic growth for the middle class." The signature supports Canada's "commitment ... to enhance tax fairness and combat international tax avoidance."

The earliest that the Convention is expected to come into effect in Canada is January 1, 2019, with respect to withholding taxes and, for all other taxes, in the first taxable period beginning after June 2019.

Signatories were required to provide a preliminary list of notifications and reservations at signing, as the Department of Foreign Affairs, Trade and Development did on May 30, 2017, with its Status of List of Reservations and Notifications at the Time of Signature. Canada has listed 75 of its 93 tax treaties in its list.

To watch the signing ceremony, click on the video below:

The Canadian tax system is suffering from a serious trust deficit. So say the numbers in a recent global survey
David J. Rotfleisch

The deal offered to KPMG's clients is the deal I would have expected, says David Rotfleisch
Thought Leaders