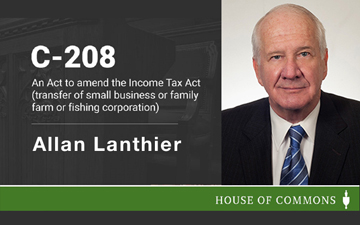 In part two of a two-part series, Allan Lanthier outlines the strategy for legislative repeal and predicts what lies ahead for Bill C-208

Montreal – An individual who sells a business to family members often faces a heavier tax burden than would have applied on a sale to an unrelated third party.

Part I of this article described the attempts to fix these rules over the last several years, and provided a detailed analysis of a private member’s bill — Bill C-208 — that received royal assent on June 29. Part II describes the government announcement that followed, and gives a prediction of what may lie ahead.

In 2017, finance minister Bill Morneau announced that the government would work with family businesses, including farming and fishing businesses, to make it more tax efficient to transfer a business to the next generation. In fact, two private member’s bills had already tried to do exactly that, and accommodate transfers to children and grandchildren. The first bill was sponsored by a Liberal MP when the Liberals were in opposition in 2015, and the second by a member of the NDP caucus in 2016. Both attempts failed.

The government continued to dither, and so Conservative MP Larry Maguire took over the file and introduced the bill for the third time. This time it passed, and with bipartisan support. All opposition party members voted in favour of the bill, as did 19 Liberal MPs. Bill C-208 received royal assent on June 29 and became law on that date. But the new law was deeply flawed: Bill C-208 contains loopholes that create a new surplus stripping scheme: it also has a number of drafting errors.

The news release of June 30

What was the government to do? It had allowed a bill that was in desperate need of repair to become law but, particularly with an election on the horizon, it did not want to antagonize all of the small business and farming lobbyists across the country. Its response was political gamesmanship at its best.

The day after Bill C-208 received royal assent, the government announced that the bill did not include a coming-into-force provision, that the government is committed to facilitating intergenerational business transfers while preventing tax avoidance, and that it therefore proposes to introduce legislation to “clarify” that these amendments would apply as of January 1, 2022.[1]

There is in fact nothing to “clarify”. The Interpretation Act governs the interpretation of every federal law in Canada and states in part that an enactment that is not expressed to come into force on a particular day shall be construed as coming into force on the expiration of the day immediately before the day of royal assent.[2] Bill C-208 is therefore in full force and effect, and its provisions are now part of the Income Tax Act.[3]

Political-speak aside, what the government announcement really said is that, sometime later this year, it intends to retroactively repeal the relief that was just added to the Act with bipartisan support, and introduce new provisions that have yet to be determined, let alone drafted, to take effect next January. Until that happens, many family business transfers will not be able to proceed.

“Retroactive legislation, although within the power of Parliament is legal but undesirable. The inappropriateness of reassessing taxpayers who completed transactions in accordance with the law in force at the time of those transactions without any expectation of adverse retroactive effect is self-evident.”

In this case however, the government announcement of June 30 did put taxpayers on notice that the law that is now in force as a result of Bill C-208 will be retroactively repealed later this year. There is therefore no element of surprise, and Parliament has every right to proceed with the announced repeal if it so decides.

The framework of the rules to come is fairly predictable: in fact the province of Quebec already has similar provisions that limit tax relief to genuine business transfers.[6] We should expect to see something along the following lines:

This long saga should reach a happy ending by the end of this year, but the government should have never allowed the process to unfold as it did. Announcing that a law will be repealed the day after it is enacted by Parliament is no way to run a railroad, let alone a country. Canadians — including small business owners — deserved better.

Allan Lanthier is a retired partner of an international accounting firm, and has been an advisor to both the Department of Finance and the Canada Revenue Agency.

Read part one of this two-part series: Tax relief for family business transfers: A legislative fiasco – Part I.

[3] The Canadian federal Income Tax Act, referred to herein as the “Act”.

[6] Sections 517.5.3 to 517.5.11 of the Quebec Taxation Act. However, the Quebec provincial restrictions are much too detailed and complex: they may therefore give direction, but should not serve as a model for new federal law.

[7] This amendment would not apply on the sale of shares of a subject corporation, by the estate of a deceased individual, to a purchaser corporation controlled by the beneficiaries of the estate. However, the traditional planning for so-called “post-mortem pipelines” (planning which is beyond the scope of this article) should continue to apply.

[8] While Bill C-208 has an ownership test based on 60 months, this period of time may be too lengthy in the context of law that has more robust safeguards. A lot can happen in 60 months, and it seems odd to only finally determine the tax consequences of a transaction five years after the transaction has taken place. It is therefore hoped that Finance will settle on a shorter period of time.

[9] Under the Act, business activities can generally be carried on through a third-party agent: see for example the decision of the Federal Court – Trial Division in Canada Trustco Mortgage Company ([1999] 2 CTC 308). Such a rule should therefore require that the children or grandchildren themselves be actively involved in the business.

The myth of CERB forgiveness

There is little evidence supporting the efficacy of the SBD, says Allan Lanthier