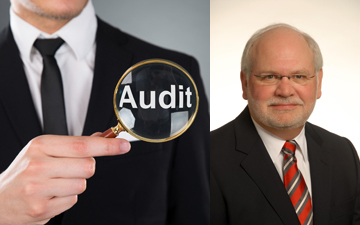 TORONTO, April 30, 2018 – The Canadian accounting and audit profession is undergoing “tremendous change” and the audit of the future will be very different than what it is today. So says Brian Hunt, FCPA, FCA, the now-retired, former chief executive officer of the Canadian Public Accountability Board (CPAB), in a wide-ranging interview with Canadian Accountant.

The future of audit regulation and inspection in Canada will change as well, with a greater focus on consistency of execution rather than significant inspection findings. “I think we’re closer to what audit regulation should look like than we ever have been,” says Hunt.

A founding director of CPAB before his appointment as CEO in 2009, Hunt is the former CEO of the Institute of Chartered Accountants of Ontario (now CPA Ontario) and current Chair of the International Forum of Independent Audit Regulators (IFIAR).

He discussed the current state and future of audit and accounting regulation as a companion piece to “A Material Retirement,” which focuses on the changing role of audit committees, penned by this writer for the Director Journal, published by the Institute of Corporate Directors.

How the digital revolution will change audits

As the pace of technology continues to accelerate, bringing new developments in artificial intelligence, blockchain technologies and machine learning, Hunt wonders about the relevance of audits in the future. “We do a lot of things today that you really have to wonder about. What’s the audit of the future look like? I think it will look like very different than today.”

Citing companies like Amazon, Apple and Google, Hunt believes that more thought must be given, from an audit perspective, to what drives value in a company. “What drives the capital markets today? It isn’t the year-end audit. If you listen to analysts’ calls, they’ll have one line about the previous year. It’s all about the next quarter and projected earnings. We’ve got to really think about what’s driving the markets and what should we be providing assurance on.”

Citing the growth in voluntary reporting as an example, Hunt uses the case of Boeing. “What’s the most important number in their annual report? It’s the back orders. It’s their order book. And it’s not audited. Nobody opines on it.”

Hunt says the digital revolution, specifically data analytics, is already affecting the composition of audit teams at the Big Four. The firms need engineers, mathematicians and scientists for algorithms, data extraction and artificial intelligence. “If you go back 10 years, they probably had none of those people,” says Hunt. “Today they have all kinds of them.”

The challenge for CPAB will be in determining whether the firms are extracting the right data. “Who do we need to bring on board to do that?,” asks Hunt rhetorically. The cost of hiring skilled data analytics personnel would be prohibitive for CPAB. Hunt sees instead a solution in the potential for international regulators to pool their resources.

Just as the composition of audit teams is changing, so too will the staff resources at CPAB. “If I go back three, four years, everybody was coming from the Big Four firms, then some of the smaller firms. Our last few hires have come out of internal audit. Because now we’re into business processes.”

How CPAB is changing the focus of inspections

Under Hunt’s stewardship, CPAB has moved to evolve its inspection approach to incorporate additional operational reviews of the effectiveness of firm structure, accountabilities, quality processes, and culture.

Significant findings will always be a part of CPAB’s annual review but won’t be the sole factor. “We’re looking at how do we measure audit quality and how do we assess it. I think when we get the processes in place and how the firms are managing their portfolios — and the deficiencies, those two go together — we’ll be closer to assessing.”

A significant inspection finding is defined as a deficiency in the application of generally accepted auditing standards that could result in a statement. In its “2017 Big Four Inspections Report,” in which CPAB reported on the resuts of 86 audit engagement files of the large firms, the number of deficiencies have continued to drop over a three-year period. But the numbers, explains Hunt, tend to fluctuate each time  a new factor, such as regional or mid-tier firm engagements, are added to the annual review.

“I would suggest to you,”says Hunt, “that, as our inspection strategies evolve, our public report will look very different in 2019, 2020, than it does today. I suspect we’ll be talking to senior partners about processes they need to put in place, or controls that didn’t work but were supposed to work, to drive consistency of execution. That to me has got to be our mantra. It’s about consistency of how the firms execute.”

Part of the changing focus on inspections appears to stem from the nature of the audit cycle itself. “After the year-end, I always say professional scepticism goes down, as you get closer to that sign-off, and risk tolerance goes up,” says Hunt. “So now you have a discussion of how much work is done before year-end because that’s usually better quality. When we find a deficiency, it’s after year-end, typically.”

He is “frankly, very excited” about CPAB’s audit quality indicator (AQI) pilot project. In 2016, CPAB launched an AQI pilot project with audit committee chairs and their management teams, in which participants were encouraged to select a limited number of indicators (five to 10) in the first year of the pilot covering audit execution, firm level metrics, management indicators, engagement team and client service indicators.

According to the International Federation of Accountants (IFAC), “Audit quality remains an elusive construct to both define and measure,” yet, as of 2016, no less than nine organizations around the world were working on its measurement, in the hopes of “what gets measured gets managed.”

One of the positive outcomes of CPAB AQI pilot project, is the closer collaboration and awareness demonstrated by the three traditional parties in an audit — the audit committee, the audit partner and the preparer (the CFO). “It’s not only the audit committee chair that’s becoming more aware, it’s the entire audit committee,” says Hunt enthusiastically.

Hunt notes that the companies in the AQI pilot project are large cap, TSX 60 players. “We need to take that down to the mid-tier, $100-million market cap, and I think there’s some very responsible people who will take this on. There’s others that it’ll be a tougher sell. But I think we can scale it and benefit everyone by raising that bar.”

Consistency is a global challenge

On the subject of AQIs, Hunt praises the relationship between CPAB and its American equivalent, the Public Company Accounting Oversight Board (PCAOB) and its Office of Research and Analysis. The two regulatory agencies share a common narrative dating back to the Sarbanes-Oxley Act of 2002, which created the PCAOB and, by extension, led to the founding of CPAB.

In December 2017, the United States Securities and Exchange Commission announced a complete change in the composition of the PCAOB, with the appointment of William Duhnke as chairman and four new board members. “I have to say it was a bit of a surprise, from my point of view, that they changed all the directors at once,” says Hunt. “All indications are it’s business as usual. I’m not sure you’ll see that big of a change.”

Hunt says that globally, in terms of audit, the big firms still face audit challenges, including in the U.S. “They’re not consistently executing, in terms of audit. We see it in Canada — our results are better but there’s a real consistency issue and [the firm] have to look at their quality processes and manage their entire portfolio more effectively — but we see that in the U.K., we see it in Japan, we see it in Australia.

“So you might see a bit of a different approach coming out of the PCAOB but I don’t think it’s going to be that dramatic. We’ve had a good relationship with them.”

As Hunt’s role as the current Chair of IFIAR continues, he looks forward to meeting with the new chairman, and discussing the Canadian inspection process and CPAB’s work on AQIs. They are a large but by no means his sole legacy as a founder and steward of independent audit regulation in Canada.