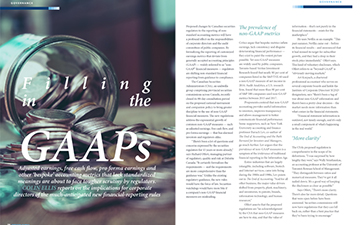 Implications of the CSA’s proposed non-GAAP disclosure rules, from the ICD Director Journal

Adjusted earnings, free cash flow, pro forma earnings and other ‘bespoke’ accounting metrics that lack standardized meanings are about to face tougher scrutiny by regulators. COLIN ELLIS reports on the implications for corporate directors of the much-anticipated new financial-reporting rules. (This article originally appeared in the January/February 2019 issue of Director Journal, published by the Institute of Corporate Directors.)

TORONTO, February 21, 2019 – Proposed changes by Canadian securities regulators to the reporting of non-standard accounting metrics will have a profound effect on the responsibilities of corporate directors and the audit committees of public companies. By formalizing the reporting of customized earnings metrics that deviate from generally accepted accounting principles (GAAP) — widely referred to as “non-GAAP” financial measures — regulators are shifting non-standard financial reporting from guidance to compliance.

The Canadian Securities Administrators (CSA), an umbrella group comprising provincial securities commissions across Canada, recently closed its 90-day consultation period on the proposed national instrument and companion policy to bring greater discipline to the use of non-GAAP financial measures. The new regulations address the exponential growth of common non-GAAP measures — such as adjusted earnings, free cash flow, and pro forma earnings — that has alarmed investors and regulators alike.

“There’s been a lot of questions and concerns expressed by the securities regulators for 15 years or more already,” says Richard Olfert, managing partner of regulatory, quality and risk at Deloitte Canada. “It certainly formalizes the requirements — and the requirements are more comprehensive than the guidance was.” Unlike the existing regulatory guidance, the new rules would have the force of law. Securities watchdogs would have more bite if a company’s non-GAAP financial measures are misleading.

The prevalence of non-GAAP metrics

Critics argue that bespoke metrics inflate earnings, lack consistency and disguise deteriorating financial performance — they exist to paint the rosiest picture possible. Yet non-GAAP measures are widely used by public companies. Toronto-based Veritas Investment Research found that nearly 80 per cent of companies listed in the S&P/TSX 60 used a non-GAAP measure of net income in 2016. Audit Analytics, a U.S. research firm, found that more than 90 per cent of S&P 500 companies used non-GAAP metrics between 2015 and 2017.

Proponents contend that non-GAAP accounting provides useful information to investors, improves transparency and allows management to better communicate financial performance. Some supporters, such as New York University accounting and finance professor Baruch Lev, co-author of The End of Accounting and the Path Forward for Investors and Managers, go much further. Lev argues that the prevalence of non-GAAP measures is a symptom of the irrelevance of traditional financial reporting in the Information Age.

Entire industries that are largely intangible, including software, biotech and Internet services, came into being during the 1980s and 1990s, Lev points out in The End of Accounting. “And for all other business, the major value drivers shifted from property, plant, machinery, and inventories, to patents, brands, information technology, and human resources.”

Olfert asserts that the proposed regulations are “an acknowledgment by the CSA that non-GAAP measures are here to stay, and that the value of information – that’s not purely in the financial statements – exists for the marketplace.”

He uses Netflix as an example. “This past summer, Netflix came out – before its financial results – and announced that it had missed its target for subscriber growth, and they had a drop in their stock price immediately,” Olfert says. This kind of voluntary disclosure, which Olfert refers to as “beyond GAAP,” is “obviously moving markets.”

Art Korpach, a chartered professional accountant who serves on several corporate boards and holds the Institute of Corporate Directors’ ICD.D designation, says “there’s been a tug of war about non-GAAP information and there’s been a pretty clear decision – the market needs more information than what comes in the financial statements.

“Financial statement information is outdated, not timely enough, and it’s only a small component of what’s happening in the real world.”

The CSA’s proposed regulation is comprehensive in the scope of its definitions. “I was surprised by how lengthy they were,” says Wally Smieliauskas, an accounting professor at the University of Toronto’s Rotman School of Management. “They distinguish between ratios and numerical measures. They’ve got it all nailed down. It’s a good way of keeping the disclosure as clear as possible.”

Says Olfert, “There’s more clarity. There’s also far more detail. Questions that were open before have been answered. Securities commissions will now have regulations that they can fall back on, rather than a best practice that they’ve been trying to encourage.”

The CSA chose not to prohibit specific measures or create industry-specific measures but rather to formalize what had previously been guidance. “Auditors have to review a lot of this information anyway,” Smieliauskas says, “and I guess auditors will find the information useful. Management is free to use whatever metrics they want but not to overshadow the ones that have been standardized.”

The new companion policy makes clear that the requirements for non-GAAP disclosure extend far beyond voluntary disclosure in financial statements — such as the management discussion and analysis (MD&A) — to communications channels such as websites, press releases and even social media such as Twitter.

The CSA’s proposed new regulations should pique the interest of corporate directors, Olfert says. That interest could range from curiosity to more in-depth questions about the use of corporate communications channels, the kinds of documents in which non-GAAP information appears, and the frequency and consistency of the measures.

Once the regulations are implemented, he adds, “it’s quite conceivable that audit committees will look for additional assurance from auditors and management about the process used to establish non-GAAP measures. They will be looking for an additional level of comfort whether from management or auditors.”

Olfert suggests another “more far-reaching” implication for corporate directors and audit committees. “Maybe we should stop and think about how we’re telling our financial story as a whole. Many organizations are putting information into the marketplace that is not financial but is incredibly important to the impression that the capital markets form about those companies and how they value them.” Audit committees may want to ask whether beyond-GAAP measures have the same consistency and rigour as regulated ones, he says.

“Companies are going to have to take these audit companies more seriously and make sure they have somebody who is an expert on reporting issues and compliance issues,” Smieliauskas says. “Previously it used to be pretty informal. It increasingly is becoming a very specialized function internally.”

To Korpach, the accountant and corporate director, the new regulations will be “burdensome, without a lot of value-add.” He is concerned about the regulatory demands on corporate directors. “How do boards carve out appropriate time to focus on strategy?” he asks. “Instead we’re spending most of our time on compliance governance, driven by regulation. Where’s the cost-benefit test on that regulation?”

He questions the value of requiring detailed non-GAAP reconciliations in all documents rather than just for the annual core documents. “Has society been that wronged by what’s been going on?,” Korpach asks, adding that the new regulations don’t address the real issue: Today’s financial statements aren’t providing enough of the information that investors need.

“Who will provide assurance on all this other information, if the markets are driving off of Boeing’s order backlog or the number of [Netflix] subscribers? This narrow concept of ‘auditors audit financial numbers’ — that’s a little bit narrow for where this world’s heading.”

By Colin Ellis, managing editor of Canadian Accountant. This article originally appeared in the January/February 2019 issue of Director Journal, published by the Institute of Corporate Directors.

Directors who serve on their board’s audit committee have significantly greater responsibility today than they did 15 years ago. Retiring CPAB CEO Brian Hunt, FCPA, FCA, played a key role in that shift.
Thought Leaders

Catching up with Professor Baruch Lev