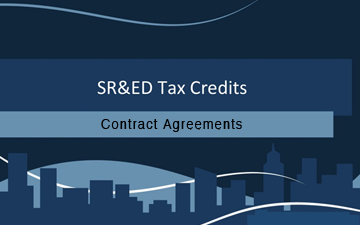 Canadian accountants filing SR&ED claims should be careful when their client companies use subcontractors, explains Richard Hoy of Catax Canada

When a business uses subcontractors, the amount paid under these contracts is eligible for SR&ED, and 80 per cent of qualifying expenditure can be claimed for input tax credit (ITC) purposes.

However, the company that is paying for the qualifying activity cannot simply assume that it will be able to claim the ITCs for itself.

A contract agreement will have to be in place if the client wants to claim SR&ED on the qualifying activities performed by another entity.

Correctly worded terms and conditions within the contract are the key here. By making clear that the entity paying for the work is explicitly asking the contractor to perform SR&ED on its behalf, the contract will preserve the right of the business to claim the ITCs itself.

The requirement that SR&ED be explicitly cited in contract agreements is a step that’s often forgotten when contracts are drawn up in haste.

If this is not done, a ‘first past the post’ scenario plays out, under which the subcontractor is eligible to claim the ITCs itself. In this situation — because ITCs cannot be claimed twice on the same expenditure — the contractor can claim the ITCs and prevent its client from benefiting.

This is a poor outcome for the client business — the ‘payer’ — which has conceived of the R&D project and paid for all the work to be done. It should have protected itself contractually, and accountants and tax advisors can play an important role here in ensuring this is done.

When the party performing the work succeeds in claiming the ITCs, its qualifying SR&ED expenditures must be reduced for ITC purposes by the amount of money received under the contract.

If any SR&ED activity has been paid for under a contract but not yet performed, it falls under the prepaid expense rules and is not deductible in the tax year.

Where the R&D takes place is important

Even if a subcontractor is used, it remains the responsibility of the claimant (payer) to prove that the work performed on its behalf by an arm’s length party was SR&ED carried out in Canada and that it was directly related to the business of the claimant.

Special rules apply when a claimant (payer) enters into a SR&ED contract with a non-arm’s length (NAL) party. Here, the claimant's expenditures under the SR&ED contract are allowable but don’t qualify for ITCs. Instead, the NAL entity is able to claim the SR&ED ITCs in its place. The amount of benefit is not classed as a contract payment, and so does not reduce the NAL’s qualified expenditure for ITC purposes. It is not possible to circumvent these rules by inserting an arm’s length party in between the claimant (payer) and the NAL. In this scenario, none of the corporations would be entitled to claim an ITC for the SR&ED performed.

The method used to allocate the contract amount between domestic activity and that carried out in other countries must be reasonable. Calculating the fair market value of the work, for example, would be acceptable but the claimant must be able to demonstrate to the CRA how the costs were allocated between territories. Once it has done so, the CRA will look at the contract to determine the type of expenditures incurred, and calculate the claimant’s qualified SR&ED expenditures.

Some companies also pay approved universities, colleges, and research institutes to perform SR&ED — these are commonly known as third-party payments. It’s important to make a distinction when they do. With third-party payments, the payer does not control the SR&ED being performed but is entitled to exploit the results.

Unlike contract expenditures, third-party payments are usually eligible for SR&ED incentives when the payment is made (cash basis), rather than when the work is performed.

There are a few exceptions to the rules concerning suppliers that aren’t taxable.

SR&ED ITCs cannot be claimed where the contract payment goes to, or will benefit, a person or partnership that is not a taxable supplier. This does not apply to an expenditure on SR&ED directly undertaken by the claimant.

A SR&ED performer that does the work on behalf of a client but is not a taxable supplier does not have to reduce its qualifying SR&ED expenditures by deducting the contract payment.

Richard Hoy is president of specialist tax consultancy Catax Canada. You can reach him at richard.hoy@catax.com.

Avoiding the pitfalls of partnerships when making SR&ED claims

How to help clients avoid grant penalties in SR&ED claims

When a client wins grant funding, it can have a dramatic impact on their claim
Practice

The CRA is hiring SR&ED advisors in Ontario's hot tech corridor. What does it mean to practitioners like you?