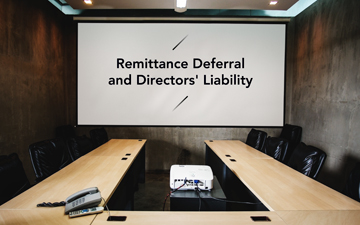 TORONTO – One of the many measures that the Federal Government has taken to protect employment and ease cash-flow crunches during the ongoing Coronavirus pandemic is to allow businesses to defer, until June 30, 2020, the remittance of net GST/HST amounts (collectible/collected minus input tax credits generally) (the "Remittance Deferral") that became owing between March 27, 2020 and the end of May 2020 (the "Deferral Period").

Pursuant to subsection 323(1) of the Excise Tax Act (Canada) (the "ETA"), directors of a corporation are jointly and severally liable with the corporation for any net GST/HST that the company fails to remit to the CRA. However, the ETA absolves directors of personal liability under certain, specified circumstances. For example, the CRA cannot assess a former director, in respect of a corporation's failure to remit net GST/HST amounts, more than two years after the person ceased to be a director,1 and the CRA must take steps to try to collect the amount (or any portion of it) from the corporation before assessing a director personally.2

The Due Diligence Defence

Subsection 323(3) of the ETA contains the due diligence defence to director's liability. The law places the onus of establishing the defence of due diligence on the directors. A director must show that he or she exercised the degree of care, diligence, and skill to prevent the failure to remit net taxes that a reasonably prudent person would have exercised in comparable circumstances.

The Courts have repeatedly stated that directors of corporations in financial difficulty cannot use GST/HST amounts collected to satisfy non-CRA creditors in the hopes that the corporation's financial condition improves such that net taxes can eventually be remitted to the CRA. Indeed, the Federal Court of Appeal recently stated that this mischief is exactly what section 323 of the ETA3 aims to prevent, and that the due diligence defence was not available in such circumstances.4 The Court confirmed that the due diligence defence is focussed on the steps that a director takes to prevent a failure to remit on time, not the steps a director takes later to correct the previous failure to remit.

The Remittance Deferral and Directors' Liability

If the CRA were to seek to assess any Remittance Deferral, it is unclear how section 323 of the ETA would apply, and what approach the CRA would or should take. Would the due diligence exercised by directors to prevent (not cure afterward) late remittances need to be established at the time that the net tax remittances became due under the ETA within the Deferral Period, or when they actually become due, at the end of the Deferral Period, under the CRA's administrative relief? The jurisprudence confirms that what happens after the net tax remittance is due under the ETA is irrelevant. Only the director's conduct up to that point in time is relevant. In the context of the Remittance Deferral approved by CRA, that approach contemplated under the law does not make sense.

To date, the CRA has made no such statement.6

Protective "Due Diligence" and Other Measures for Directors to Take

In the absence of a CRA statement absolving directors from personal liability relating to Remittance Deferrals, and taking into account that the Federal Government's and the CRA's attention will eventually shift to recouping amounts spent during this pandemic, directors should take steps to maximize their ability to successfully invoke the due diligence defence in case needed.

However, the divergence between the purposes of section 323 of the ETA and the Remittance Deferral renders any potential application of the due diligence defence with respect to GST/HST amounts not remitted during the Deferral Period problematic. The question becomes: what steps should directors take?

(i)   Ensure that the corporation has established a separate account for withholdings (a "Withholdings Account") that will need to be remitted, including GST/HST collected;

(ii)   Call upon the financial officers of the corporation to regularly report on the status of the Withholdings Account; and

(iii)  Regularly obtain confirmation that withholdings, remittances and/or payments have, in fact, been made.8

Ideally, directors should ensure that corporations take each of the three actions above, if such processes were not in place before the pandemic. However, that conflicts with the purpose of the Remittance Deferrals in the first place.

In the absence of other guidance, corporations and directors should assume that GST/HST remittances in respect of reporting periods after the Deferral Period expires must be made on time, and that the CRA will rely on section 323 of the ETA if such remittances are not made.

Directors should also be calling on the corporation's financial officers to develop these plans and projections now, and evidence of such communications with financial officers should be retained. This way, directors will be able to demonstrate that they were aware of the corporation's obligations to make up any GST/HST Shortfall, and that they were actively planning to remedy the failure to remit during the Remittance Deferral and prevent failures from arising after the expiry of the Deferral Period.

Certain directors may also wish to resign their position in order to start the two-year limitation period for the CRA to assess them personally with respect to a corporation's failure to remit net GST/HST. This option may be particularly attractive for outside directors with little or no control over the corporation's operations. Such directors should review the statute under which the corporation is governed to ensure that they correctly resign their position.10 Directors who have validly resigned at law should not continue to act as de facto directors of the corporation, or they could still face personal liability for unremitted net GST/HST amounts owing.11

Footnotes
1. Subsection 323(5) of the ETA.
2. Subsection 323(2) of the ETA.
3. And similar provisions in the (i) Income Tax Act, (ii) Air Travellers Security Charge Act, (iii), Excise Act, 2001, and (iv) Softwood Lumber Products Export Charge Act, 2006.
4. See Ahmar v Canada, 2020 FCA 65.
5. This may occur because the corporation is or soon will be insolvent, or because the corporation simply does not have sufficient cash to make regular GST/HST remittances and make-up for a shortfall during the Deferral Period.
6. When representatives of the CRA were asked about directors' liability for unremitted GST/HST amounts at a CRA/Canadian Bar Association Meeting on May 6, 2020, their response was non-committal.
7. We note that the Circular speaks to steps directors can take to demonstrate their efforts to prevent failures to remit, not correct past failures, such as those permitted by the Remittance Deferral. Given the unique circumstances of the Remittance Deferral, the Circular may not be perfectly applicable.
8. Circular, at para. 12.
9. Such as if the Corporation has unclaimed input tax credits from the previous four years.
10. See, for example, Chriss v The Queen, 2016 FCA 236.
11. See, for example, Bremner v The Queen, 2009 FCA 146.