Corporate leadership: Why the tone at the top has moral consequences 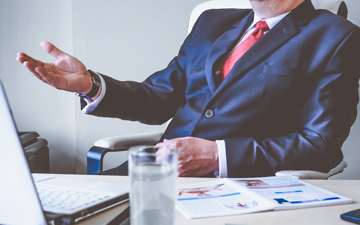 Montréal – In November, Air Canada made headlines when its CEO gave a talk at the Chamber of Commerce in Montréal and admitted he doesn’t speak French.

Michael Rousseau has lived for more than a decade in Montréal, where Air Canada is headquartered. He has since apologized and committed to learning French. However, the fallout from his talk continues.

More recently, the CEO of SNC-Lavalin postponed a speech he was scheduled to give in Montréal, committing to first brushing up on his French.

The media attention focused on Air Canada and SNC-Lavalin illustrates the importance of CEO conduct. Indeed, what CEOs say and how they say it are essential — it sets the tone at the top of the firm and can have far-reaching repercussions.

Tone at the top — what it is, what it does

Tone at the top refers, broadly, to what a company’s leadership talks about, how they talk, what they do and how they do it. Tone at the top is internal when leaders talk to employees and act inside the organization. It’s external when leaders address broader audiences, like Rousseau’s speech in Montréal, and their actions take place outside the organization.

Tone at the top can be delivered different ways: it can be in-person or remote (delivered via newspapers, news releases, reports, social media, videos).

Tone at the top reveals the moral reasoning of organizational leaders, revealing what they believe is right or wrong and what matters or does not matter. When CEOs give talks in a francophone region yet only speak in English, doing so reveals their beliefs about whether language matters — and what language they believe is most important.

The moral reasoning revealed by tone at the top has consequences. CEOs have authority because of their position at the top of the corporate hierarchy. What they say and do trickles down the hierarchy to all employees, legitimizing particular behaviours along the way. A CEO who speaks English in a francophone setting signals that it is acceptable to do so and not to speak French.

Tone at the top — the bad and the good

Tone at the top therefore has moral weight. It can promote a particular culture within an organization, encouraging employees to behave in more or less moral ways.

Tone at the top can contribute to a culture permissive of harassment. Uber CEO Travis Kalanick, for example, resigned in 2017 after an internal probe documented widespread sexual harassment under his watch.

Corporate culture can create a climate where harassment, including sexual harassment, flourishes if leaders are passive, avoid making decisions and fail to intervene when faced with inappropriate behaviour until serious problems arise. “Laissez-faire” tone signals that inappropriate behaviour is tolerated, legitimate and will not be punished or corrected. Perpetrators are encouraged, victims silenced; bystanders know about the behaviour but don’t stop it.

Further exacerbating this problem is hostile leadership characterized by aggressive behaviour that creates a climate of fear and silence. Problematic behaviours promoted by tone at the top are manifold and include insider trading, misreporting and earnings management.

On the other hand, tone at the top can promote a healthy culture when leaders model moral behaviour.

The women leaders in corporate Canada who I’ve interviewed often emphasize the importance of care and empathy in leadership.

One leader spoke about what people value, pointing out that they are “not going to get behind something that’s illegal or whatever. So the trust and integrity peace pivots into successes.” She explained that trust requires “integrative thinking,” which “comes from listening and being open.”

Tone at the top — what to do about it

Ideally, leaders are attentive to their communities, behave responsibly and model good behaviour. They are aware of how their words and deeds carry particular moral weight.

Getting there starts early. Leaders are a product of their societal cultures. Education is vital to ensure we’re all aware of what we say and do, how this resonates with others and what impact our words and behaviour have on them.

Closer to executive offices, boards of directors are responsible for monitoring corporate leaders; they need to act proactively before a crisis occurs.

Doing so involves defining what they see as proper behaviour and what crosses a boundary by asking questions about expectations, priorities and how leaders act and talk. They need to lay out what happens when boundaries are crossed.

Board members need to leverage this information during the recruitment process to identify leaders who are a good match for the firm and, after that, to accompany and evaluate leaders comprehensively and regularly.

Claudine Mangen is the RBC Professor in Responsible Organizations and an associate professor at Concordia University in Montréal. This article was originally published on The Conversation (Canada). Top image royalty-free from Piqsels.

In the first of a three part-series, CFO of the Year Michael Rousseau, CPA, CA, shares the management strategies that has Air Canada soaring once again
Opinion