The multi-generational accounting firm, part one 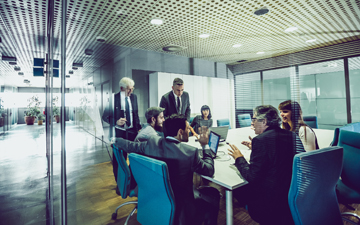 OTTAWA – Accounting firm leaders, like other members of professions and industries, are changing many of the traditional ways they conduct business today. Rapid advances in technology are a clear driver of this change. But so too is the impact of younger workers who have grown up with technological change, and are now rising to prominence as the dominant generation in the workplace.

They bring not only a unique background but also, in many cases, different lifestyle expectations than their predecessors. This has had a strong impact on the profession, in firms of all sizes, note partners.

“Maybe it’s a little cliché, but certainly the younger generation are more attuned with technology, and making sure that we’re keeping up. They grasp it a little quicker, so they can then help disseminate it to us older guys, and make sure that we’re on track,” says Jason Kingston, a principal with DSK LLP in Kitchener, whose firm has 15 full-time staff and partners, ranging in age from their early 20s to early 60s.

“The majority of our staff is in the younger generation, so it’s easier for us to adapt to what they want than try to force them to stay in the Middle Ages with us,” jokes Kingston, 41.

The influence of three of those generations — baby boomers, Generation X, and millennials, is most keenly felt by the accounting profession today, although some traditionalists also remain in the ranks. With members of Generation Z about to enter firms in the next few years, the confluence of so many distinct generations working together all at once presents unique challenges, but also opportunities.

Dawn McGeachy is a partner with Colby McGeachy Professional Corporation in Almonte, Ont., which has six employees and partners, ranging in age from 33 to 78. She notes that younger employees communicate differently, which is a significant factor in a profession that relies strongly on interpersonal relationships.

“I find that the way they interact with the partners, and importantly the clients, is a lot more relaxed,” says McGeachy, who is at the cusp of the baby boomer and Generation X age categories. “So we have made a concerted effort with every new staff member that they are supervised for a certain number of months until we know that they have adopted our particular culture, and then they are allowed to interact without that kind of supervision.”

For example, “I don’t want them going to my 65-year old client and saying ‘Hey Bob.’ I want them to say ‘Hello Mr. Smith’ or ‘Good morning Mr. Smith,’ she explains.

McGeachy also acknowledges how the prowess the younger generation has with technology, and their enthusiasm about providing feedback for how workflow can be improved, benefits her firm. She recalls how, when Colby McGeachy changed its software for tax preparation in 2017, leading to a major change in terms of how returns were prepared, the younger employees were excited about that change and were very engaged during the training sessions teaching them how to use it.

Moreover, “they’re so plugged into social media. When they get a new phone, for example, they’re just so super-excited [about what] this new cool stuff it can do. And when you think about it, these phones have more capacity than the original computer I worked on,” McGeachy notes.

Stephen Shea, managing partner of talent at EY Canada in Toronto, says very clear synergies come from the unique qualities each generation has to offer the others. This makes team composition a very important exercise.

At EY, about 66 per cent of the firm’s 5,500 employees are millennials, another 25 per cent, or one quarter are from Generation X, and baby boomers make up the remaining nine per cent.

“In our view, a high performing team is core to our success in creating an inclusive environment. That means inclusivity driven not just by gender and diversity. It is inclusivity of thought, inclusivity of allowing people to be different and to bring different perspectives,” Shea says.

For example, he notes, the younger generations – particularly millennials and the Generation Z in their wake, are extremely technologically literate, well connected and comfortable with the digital economy. But the younger workers lack the experience of dealing with clients and having to make tough decisions.

“You still have to earn your stripes by working in the trenches, dealing with how to solve tough client situations. Synergies come from the mentorship of the more senior people to the younger people in terms of how they handle client relationships, and the world of wisdom that they’ve learned through their experiences,” Shea explains.

What is the accounting profession and its public practice firms doing to address its demographic crisis?
Profession

Multi-generational firms: Why the Big Four are recruiting millennials

Part two of a series on multi-generational accounting firms
Profession