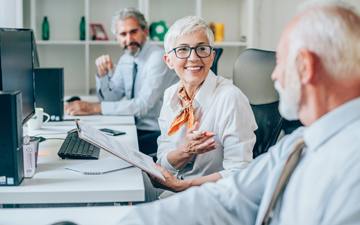 OTTAWA – “I would ask a person how to tie my shoes if I thought they could do it better.” This is my favourite of my dad’s many expressions because it reflects his deference and commitment to lifelong learning. Now well into his retirement, he still has friends he calls his “mentors.”

Recently, I’ve noticed that several of the accountants who were at the peak of Ottawa’s accounting community when I was a rookie are now retiring. These include firm-founders like David Logan of Logan Katz, and Ian Hendry and Dan Warren of Hendry Warren, as well as firm-pillars like Marg Egan of McCay Duff, Deborah Bourchier of GGFL, Ken Tammadge of Baker Tilly, and Don Scott of Welch.

As these people leave the industry, they take an internal library of knowledge on how to have a successful career and life. To inventory and disseminate this knowledge, I asked Garth Steele of Welch, Hugh Faloon of GGFL, and Susan Holtom of Bouris Wilson what advice they have for those following in their footsteps.

All three loved their firms, worked hard, and managed their personal finances responsibly, so take those as table stakes. But the additional advice they’ve shared is relevant to new accountants embarking on their career on up to partners who are considering their own retirement.

Garth (61-years old and only three months into his retirement) recalls being a greenhorn 28-year-old speaking about the new GST on a panel of experts at a Canadian Tax Foundation conference. “I was not qualified to be on that panel,” he laughs. But Garth would go on to lead Welch’s commodity tax practice for the next 30-plus years and lecture on the topic at CPA Canada’s In-Depth Tax Program and annual Commodity Tax Symposium.

For Garth, finding his niche was a stroke of luck in more ways than one. In 1989, he was managing the audit of a large company when he fell for the company’s controller. After recusing himself from the audit, his workload at Welch was reduced by one third. The GST would soon be coming into effect, so his friend and colleague Don Scott tasked him with becoming the firm’s GST expert. The rest is history — both for his niche and with the controller, Cathy, to whom he's been married for the past 31 years.

Garth believes developing a niche is critical to excelling as a CPA. While you will still do work outside your niche, an expertise helps you become known and respected in the business community and makes you indispensable to the partners at your firm.

A niche must be more specific than an industry. “Real estate” or “non-profit” are not niches in Garth’s opinion. It must be narrow enough that you can say you know more about the specific issue than anyone at the firm. It requires “pushing” as Garth calls it — meaning deeply researching that particular issue.

If you don’t already have a niche, Garth recommends talking to the partners at your firm to find out if there’s a common issue where they lack knowledge and asking your clients about their needs.

To the extent that Hugh (62-years old and three years into retirement) had a niche, it was as the “ideas person” at GGFL. From his first year at the firm back in 1990, Hugh had recommendations for how things could be done better, smarter, more efficiently.

Over the course of his 29-year career with GGFL, Hugh and his colleagues executed on several of his ideas that were revolutionary at the time. He oversaw GGFL’s marketing department as they ditched their print newsletter for an emailed version and he and Donna Ho-Faloon (current head of GGFL’s Health Professional Practice and Hugh’s sister-in-law) overhauled the way GGFL serviced its medical professionals. The latter project started slowly in 2004 and took at least 10 years for people to see the value to the firm and its health care professional clients.

Projects like these are challenging and require sacrifice. Hugh was the least chargeable partner at GGFL and his colleagues didn’t always support his ideas — even he admits, “I failed a lot more than I succeeded.”

However, for those who see themselves as ideas people, Hugh encourages you to resist doing things the way they’ve always been done. The volume of work is so great in accounting firms and the competition so fierce, he proposes you use technology and be creative.

And don’t be discouraged when you hear no. He smiles recalling a partners’ meeting a few years before he retired. Frustrated at having another of his ideas voted down, he jokingly threatened, “I can only take 10 more ‘nos’ before I retire.” To which one of his partners mischievously responded, “We could have that done by next week.”

Another reason Garth believes a niche is important is that it can guide you in determining what work to delegate when you become a senior partner. But this is something Garth admits he failed at, “I thought that if there was ‘partner-level’ work that needed to be done, then I should do that work.” He now realizes he should have been delegating more of the work that wasn’t in his niche to the newer partners.

And expecting too much of himself had consequences. About three-years ago he started to have “physical incidents.” For about 30 seconds, it would feel like someone had turned on a tap and drained the energy from his body. (These incidents had nothing to do with the ALS diagnosis he later received.)

An accountant in every sense, he started tracking these incidents and, with his doctor, determined they were happening during times of high stress. It wasn’t that one particular thing was stressing him out, it’s that there was too much work overall. “My cup was overflowing by an inch when I should have kept it one inch below the brim.”

Garth could have scaled back. His firm would have supported him 100 percent. But it wasn’t in his nature. Instead, he gave himself three years to wrap up his practice. About a year and a half prior to retiring, when he really started to offload work to his proteges, the physical incidents went away.

Sue (62-years old) did not have Garth’s aversion to scaling back. With deliberateness and grace, she transitioned from full-time partner to fully retired on her terms.

Sue began working at Bouris Wilson as a junior accountant in 1981 and became a partner in 1989. This was back when it was still so rare to have women accounting partners that certain clients wouldn’t look her in the eye during meetings. By 2013, over 30 years after joining the firm, there wasn’t much she hadn’t already seen and things started to feel stagnant.

She dipped her toe into retirement by taking Mondays off for a year. She had no trouble filling her new-found time. So, in 2014, she retired as a partner from the firm, staying on as a part-time employee for the next seven years. “It was perfect. I kept my five most important corporate clients and some of my high-net-worth clients — the ones that had the interesting issues.”

She would spend three months of the winter in Florida with her sister, then return to Ottawa and work full-time in April to help the firm. From May to December, she worked every Tuesday, which helped her transition her clients to Matt Kemp, who was taking over much of her practice.

By 2021, her extracurriculars were demanding so much of her time that her Tuesdays at the office became a burden. So, she retired for good. Sue kayaks, hikes, bikes, and water skis in the summer and downhill skis in the winter, when she’s not in Florida. She reads the newspaper each morning and does the crossword puzzle. She has many like-minded friends and has travelled to France, Italy, Spain, and China. She had a trip planned to India that was sidetracked by COVID.

Sue’s simple advice for people who are afraid they might not have enough to do in retirement: “Get a dog.”

Thanks to Garth, Hugh, and Sue for taking the time to speak with me and their candid reflections. I plan to return to this topic in years to come, so to those listed in the introduction: consider yourself on notice.

Click here to read Garth’s powerful blog about his experience with ALS: www.faith-over-fear.ca.

Dean Blachford is a senior tax lawyer at Blachford Tax Law, which specializes in helping individuals and businesses resolve significant tax disputes. He is on the Programs Committee for the Ottawa Chapter of CPA Ontario and previously participated in the Tax Court of Canada’s Law Clerk Program.

The pandemic and productivity silver linings

CPA Retirement: Should you join a condo board?

In an ongoing series about retirement planning for CPAs, a look at the pros and cons of joining a condominium board
Profession

Directors who serve on their board’s audit committee have significantly greater responsibility today than they did 15 years ago. Retiring CPAB CEO Brian Hunt, FCPA, FCA, played a key role in that shift.