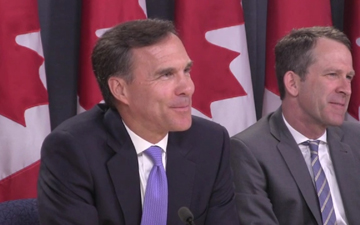 Those who do not learn history are doomed to repeat it. In 1981, Prime Minister Pierre Trudeau’s finance minister, Allan MacEachen, introduced a tax reform package that proved a political disaster.

Numerous tax loopholes that largely benefited corporations had grown like weeds across the economic landscape. MacEachan wanted to close the loopholes and “spend” the money on infrastructure, the reduction of marginal tax rates and the deficit. The backlash from business began immediately.

Within a year, almost every proposal, save the marginal rate reductions, was rolled back and MacEachan was shuffled out of finance.

Fast forward to 2017 and the Liberal government of Justin Trudeau. Finance Minister Bill Morneau has just spent the last week “stepping back” from his main tax reform proposals: an end to “income sprinkling,” a crackdown on capital gains, and a plan to target passive investment income held by private corporations. Then he delivered a convenient but pointless tax cut to small business.

It didn’t have to be this way.

In his 1989 book, “Tax reform in Canada: The process and impact,” Allan Maslove of Carleton University wrote of MacEachen, “In retrospect, it is difficult to comprehend why a government would undertake a process as potentially contentious as tax reform without prior consultation to gauge the likely public reaction and to attempt to construct a favourable consensus.”

How prophetic those words read now.

Maslove wrote that there were four reasons for MacEachan’s failure. First, the consultation process for the 1981 reforms was a secretive, closed-door affair, hidden in the shadows of budget planning.

MacEachan hoped to avoid previous and protracted public consultations that had derailed earlier attempts at reform. Instead, business quickly mobilized and launched a massive and effective public relations campaign.

Second, there were no clear winners or benefactors of MacEachan’s tax reform. Third, there were no attempts made to “grandfather” to ease the transition to reform. And fourth, the reforms came at a time when Canada was entering a serious economic recession.

Having ignored history, Justin Trudeau repeated it. Following failed electoral reform and a beleagured inquiry into missing and murdered indigenous women, perhaps he felt a pressing need to follow through on tax reform. But the plan was hatched behind closed doors and the consultation period short and poorly timed.

Then, to compound the comedy, Morneau made errors that MacEachan, who died last month at the age of 96, never made.

Morneau has allowed his opponents to change the narrative and reframe the debate as one of personal ethics, honesty and integrity. He did this by reneging on a promise to place his substantial family fortune in a blind trust and, instead, he structured his assets into two holding companies.

He did this two years ago while continuing to perform his duties as finance minister. The government is engaged in tax treaty and public sector pension reform that could benefit his family firm, Morneau Shepell. And Morneau won’t say whether he told the Prime Minister about avoiding a blind trust.

Further, unlike the late Allan MacEachen, who was widely admired as an orator, Morneau often appears ill at ease in public and confrontational with reporters. He performs well in Question Period when he sticks to his talking points but goes off-script in public, sometimes with disastrous results.

On the face of it, Morneau seems like just the kind of guy Canadian tax accountants should like. He’s got a French villa that’s held in a tax-avoiding corporation. A couple numbered companies. And a corporate subsidiary that recently moved from the Bahamas to Barbados.

He is clearly the kind of high net worth client that knows the benefit of a good tax advisor. (And who are his tax advisors, anyway?) And when he talks about one-per-centers using tax loopholes that are not available to middle-class Canadians, he should look in the mirror. It's not a pretty picture.

Further, he has allowed the Conservatives to recast themselves as defenders of the middle class, sawing through the planks of the Liberal platform. Tory backbenchers now bray about tax loopholes, offshore banking and the one per cent as though they weren’t the ones in power during their proliferation.

But worst of all is that Morneau has blown a once-in-a-lifetime chance to get tax reform right and address the rapid rise of incorporation as a tax shelter. A good news economic update may save him yet but he is damaged goods, a political liability who should resign but will likely just be shuffled out, as was Allan MacEachan, more than three decades ago.