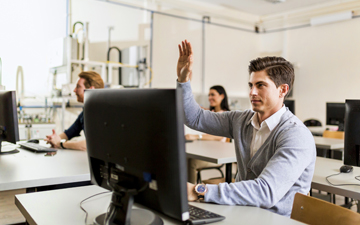 The answer, according to a study* published in the Canadian academic journal, Accounting Perspectives, depends on how well you are doing in the course. It turns out that psyching yourself up before the big exam is not the right strategy for everyone, says Professor Fred Phillips of the University of Saskatchewan.

“Lower-achieving students are anxious and more likely to start writing without planning,” says Phillips, who co-authored the study with Professor Regan Schmidt, also of the University of Saskatchewan. “The risk is they don’t spend enough time reflecting on what they understand before they start writing.”

Accounting students are often coached to spend one-third of their exam time on reading and planning their case analysis, then spend the rest of their time writing and revising. “Planning is certainly an important stage,” says Phillips. “The better you plan, the better your product.”

But there’s a drawback. “The big takeaway [of the study] was that more planning time could lead to less urgency in writing a response,” says Phillips. “That was surprising. I thought that students who spend more time planning would feel a greater sense of urgency to get on with writing their response.”

Instead, the opposite is true. “More planning time led to less urgency in writing. It’s almost an ‘easing up on the gas pedal.’ As a consequence, less performance on the overall achievement.”

The Effect of Self-Talk on Urgency

Self-talk has long been shown to enhance athletic performance. Some business executives use self-talk in the workplace to regulate emotions and make a greater impact. We all conduct interior dialogues, whether silently or quietly, especially before stressful situations like exams. But how we manage that conversation produces different outcomes.

Phillips says he sees self-talk among his students all the time. “I see them whispering to themselves in the moments before the exam starts, primarily prior to the task beginning.” While he doubts students make strategic self-talk choices, most students report trying to moderate their emotions prior to exams.

Like a hockey game or a tennis match, an exam is a test of performance in a time-constrained setting. The CFE assesses competencies through case analysis lasting anywhere from one to five hours. How one manages one’s time under these stressful circumstances is a key element of success. Students must find the right balance between planning and writing case analysis. The more time spent on one, the less time spent on the other.

When self-talk hurts or helps

Since we’re talking about case studies, let’s put the study’s findings into its own case study. Two students, Simone and Yashmeet, are about to take the taxation role portion of the CFE. Simone has excelled in previous assignments. Yashmeet has struggled.

Simone enters the exam room with confidence, Yashmeet with anxiety and doubt. Both engage in exclamatory self-talk (“I will plan and then write!”) prior to beginning their case analyses.

When higher-achieving students (like Simone) use exclamatory self-talk they spend more time planning, during which they are likely to create a more complete analysis. However, having planned-out their response, they then write with less urgency. “Planning is crucially important,” says Phillips, “but it also has a potential downside, if you allow it to create a feeling of over-confidence and complacency, especially on a time-constraint task like accounting exams.” Simone will likely be disappointed by her score.

Yashmeet, however, performs better than expected. When lower-achieving students exclaim rather than question their test-taking strategy, they spend less time planning and write with greater urgency. Exclamatory self-talk heightened the emotions of both students to very different effect. Yashmeet has benefitted from the burst of confidence.

Planning is important, in other words, but there is real danger in complacency. According to the study, students should never “relax” after planning their case response. If you’re hoping to become a Canadian accountant, increase the urgency with which you write the CFE, regardless of how you have performed in the past.