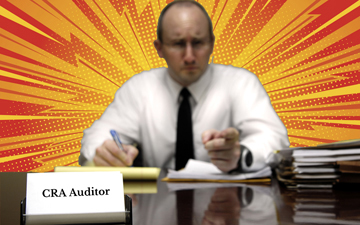 TORONTO, August 30, 2018 – Canadian tax professionals have reacted with disbelief and accusations of media bias to reports that CRA auditors believe Canada’s tax system benefits the rich. “Nonsense,” says Kim G C Moody, FCPA, FCA, TPA, the director of Canadian tax advisory at Moodys Gartner Tax Law in Calgary, Alta. “While I appreciate that this may be their opinion,” says Moody of the survey respondents, “such an opinion is shallow at best.”

The furor arose after the release of results from the Professional Integrity, Workplace Satisfaction and Tax Fairness Survey by the Professional Institute of the Public Service of Canada (PIPSC), which represents almost 12,000 employees at the CRA. Of the 2,170 respondents, seventy-nine per cent were classified as auditors by the civil service, members of the union’s Audit, Financial and Scientific Group (AFS).

“We cannot confidently extrapolate the survey findings for a broader audience since we do not have a full understanding of the CRA’s inner workings and what contributes to its employee’s opinions,” said a spokesperson for the Chartered Professional Accountants of Canada (CPA Canada). “That being said, our organization and the profession have long worked with the federal government, including the CRA, on the collective goal of a tax system that is both fair and effective for all Canadians.”

Some tax accountants have questioned the qualifications of the survey respondents. “I think it is a big leap to suggest that most of the CRA auditors would be CPAs,” wrote Moody to Canadian Accountant. “In my experience, that is not the case. Most auditors have very, very limited tax knowledge or education other than CRA provided — i.e., internal training.”

Moody expressed frustration at the survey. “People like me have dedicated my entire career to studying the Income Tax Act, tax policy, administration and the common law.  Most of the CRA civil servant auditors do not come close to such training.”

According to his online biography, Moody is a “dyed in the wool tax geek.” In a LinkedIn post he stated, “Staff at the CRA are not commonly known as ‘tax professionals.’ They are known as civil servants.”

“All of our auditors need to have either a CPA designation or equivalent education, so they are indeed professional accountants,” said a spokesperson for PIPSC, the largest union in Canada representing scientists and other professionals working in government. “Generally speaking, PIPSC auditors look at corporations and the most complex individual files, as well as leading teams that may include members from both groups.”

Says Moody, “Somehow they feel they are in a position to comment that the Income Tax Act and the administration of the Act is skewed in the rich’s favor.” That belief, he asserts, is nonsense. “And I would feel the same way if the auditors were CPAs.”

In its survey report, PIPSC counters, “These responses by thousands of tax professionals with special knowledge of the inner workings of the tax system provide a unique opportunity to see how the opinions of experts align with many commonly held beliefs about the fairness of Canada’s tax system. Nobody knows better how income from all sources is assessed and turned into tax revenue.”

Many tax accountants and lawyers in public practice accused the civil service of bias. “It is time that we acknowledge that the federal bureaucracy is ideological,” wrote one tax lawyer, who called for “proportionate representation” of conservatives. “If you surveyed the civil service on any matter they would slant far left in their views.”

“This is a very biased poll sponsored by a union that only polled CRA civil servants,” says Moody. “A non-biased poll would have polled all stakeholders — practitioners, academics, bureaucrats, non-profit members, etc. — and not just union members.” The intention of the union poll is “glaringly obvious … it wants more funding.”

“Our auditors make decisions based on evidence, and are guided by tax law, CRA policy as well as stringent ethical requirements that come from both the employer and independent professional certification bodies,” says the spokesperson for PIPSC.

Many commenters accused the CBC, which has reported widely on tax avoidance and evasion, of media bias. “Embarrassing that our national ‘broadcaster’ — the CBC — would publish this stuff,” writes Moody. “But, again, it’s the CBC. Disappointing and misleading.”

What raised the ire of many tax accountants and lawyers was the headline, “Most CRA auditors polled say Canada's tax system is skewed to protect the wealthy,” which was published online by the CBC on August 17, 2018.

Other commenters wrote, “The CBC was respectable for a very long time. Something in their propaganda shifted the last couple years.” And “CBC is socialist controlled media ....  people should do their own research if they want the true facts.” Some even labelled the CBC report “fake news.”

In the view of one chartered professional accountant, “CPA Canada is working to aggregate the accounting professionals to strengthen our united standing in the eyes of the public and yet articles such as this definitively undermine our education, professionalism and respect.”

CPA Canada cites its Framework Agreement with the CRA as a “prime example” of an opportunity for dialogue between individuals and businesses.

“We welcome the federal government’s proactive efforts to better protect the country’s tax base. However, CPA Canada also believes there must be a full review of Canada’s tax system to make it simpler, fairer and more competitive.”

Many sectors of the tax profession are now calling for a tax system review similar to that of the Carter Commission in the 1960s.

According to CPA Canada, “To truly achieve a fair tax system that supports inclusive growth and benefits all Canadians, a comprehensive tax review is required. A simpler and more efficient tax system also would assist taxpayers with compliance and the CRA with its administrative task. CPA Canada stands ready to participate in the effort.”

A look at the leading case and subsequent case law
Profession