The top 10 global accounting stories of 2019 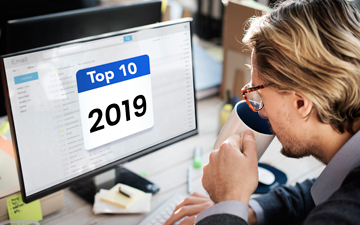 TORONTO, Dec. 13, 2019 – As we head into a new decade, 2019 will be remembered as the year when audit profession regulators struggled to maintain their reputations amidst bankruptcy scandals, political appointments and whistleblower complaints. Without further ado, the top 10 global accounting stories of 2019, in reverse order:

In October, a training seminar for women at the Hoboken office of Ernst & Young earned worldwide derision for gender-based stereotypes and bizarre instructions on dress and behaviour. Meanwhile, the head of deal advisory at KPMG UK stepped down over bullying allegations; Big Four employees are complaining about the firms’ lack of attention to whistleblower complaints.

Days after Exxon Mobil won a court battle in New York over accusations of misleading investors about the costs of addressing climate change, climate activist Greta Thunberg — Time magazine’s Person of the Year in 2019 — was in Madrid criticizing the “clever accounting and creative PR” of politicians and CEOs on carbon reduction. In November, European investors criticized auditors for not taking urgent action on climate-related risks, a claim dismissed by the International Accounting Standards Board. Watch for more debate in 2020.

There’s big money to be made in marijuana. That’s the lesson to auditors around the world after Canada legalized marijuana and KPMG Canada made a reported $9.3 million in audit and tax fees on one cannabis company alone (Canopy Growth) in 2018-19. The complexities of valuing a new market with volatile pricing, let alone valuation issues with IFRS, was a pot of gold for Canadian auditors in 2019, as Wall Street and the Big Four drool at the prospect of an $85-billion market in the U.S.

Just today, the U.S. Supreme Court said it will hear President Donald Trump’s pleas to keep eight years of his tax, bank and financial records away from the prying eyes of the district attorney of Manhattan. The justices are poised to issue decisions in June in the midst of the 2020 election campaign. The subpoenas are aimed not at Trump but Deutsche Bank, Capital One, and Trump’s accounting firm, Mazars USA, which is headquartered in France.

For their part in a scheme to share audit inspection information, two KPMG US employees and a PCAOB inspections leader were sentenced to jail in 2019, and are now serving time in federal prisons. The fates of three more KPMG partners hang in the balance with sentencings expected later this month and in 2020. The wire fraud cases of the so-called “KPMG 5” damaged the reputation of the profession but also shone some light on the stakes at place when PCAOB inspectors come knocking at the door.

In a pattern that goes back to 2014, the Big Four backed “the rule of law” in Hong Kong throughout 2019, even as a fight for democracy raged in the streets. In August, the firms distanced themselves from a pro-democracy ad placed in a Hong Kong newspaper, purportedly by employees at the firms, saying that they did not share the views expressed in the statement. In December, however, six pro-democracy candidates running for election on the Hong Kong Institute of CPAs won seats, even after the Big Four sent identical lists of pro-establishment candidates to their staff.

In 2019, we were gobsmacked by the collapse of venerable travel company Thomas Cook, which led to the loss of 22,000 jobs worldwide. (The brand will be relaunched next year by its new Chinese owner.) British politicians accused EY and PwC of complicity in the collapse and the UK’s “audit watchdog,” the Financial Reporting Council, announced an investigation into audits conducted by EY. More bad news came in the form of KPMG clients Ted Baker and M&C Saatchi.

Business has never been better for the Big Four globally yet cracks started to appear in 2019. Consistently under fire from regulators, KPMG UK reported a 14 per cent drop in annual profits amid heavy layoffs, draconian mobile phone measures and a ridiculous restructuring code name. Meanwhile Grant Thornton UK, still stinging from the Patisserie Valerie accounting fraud, announced layoffs all the way up to the partner level, and EY UK is expected to cull as well in 2020.

Beginning with the collapse of Carillion and through to the collapse of Thomas Cook, the Financial Reporting Council UK was exposed as a toothless regulator with a “parasitical relationship” with the Big Four. Suddenly, faced with its own dissolution, the FRC had its come-to-Jesus moment and found religion in 2019. All four firms fell short of the quality audit requirements and received massively increased fines for failed audits during the year. Will the FRC survive 2020? Meet the new boss, same as the old boss.

1.  Whistleblower sounds alarm over politicization of the PCAOB

The biggest accounting story of 2019 is the one with the highest potential to wreak havoc on markets, investment, pension plans and personal savings. Two years after the appointment of Republican William Duhnke as chair, a whistleblower alleges politicization of the board, internal strife and a culture of fear as audit inspections dropped 27% during the year.

With further changes planned to inspections and quality control announced this December, the PCAOB may be turning into the same toothless, paper tiger as the Financial Reporting Council. In the U.S., it may not be long before we see another Arthur Andersen.

The top 10 Canadian accounting stories of 2018

The five accounting stories worth reading again and again