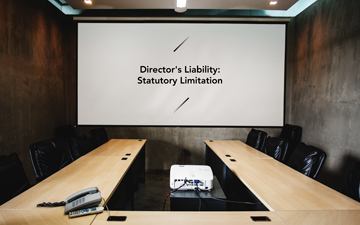 The recent Tax Court of Canada decision Soulliere v the Queen addressed the issue of director's tax liability under the Income Tax Act and Excise Tax Act. This case was decided over whether the taxpayer had, in fact, ceased to become a director at the relevant time. Before we review the facts of the case, here is an overview of the requirements surrounding CRA's ability to pursue the director's liability under the Income Tax Act.

Then, CRA must assess the taxpayer for director liability within two years. The two-year period begins when the taxpayer ceases to be a director of the corporation.

Lastly, the CRA has the onus of proving the director has been negligent in ensuring the corporation's compliance with the Income Tax Act.

The relevant statute for deciding whether the taxpayer had legally ceased to be a director in 2010 is the Ontario Business Corporations Act (OBCA). Under the OBCA, before the first shareholders' meeting is held, no director may resign unless a replacement director is appointed and elected. After the first meeting, any director can simply resign or be removed from the director's office by a shareholder resolution.

Furthermore, when all directors have ceased to be directors through either removal or resignation, the person who in fact manages the affairs of the corporation will be considered a deemed director for the purpose of the OBCA

The parties, in this case, did not dispute the fact that the first shareholders meeting for Metro 2010 had never been held. As well, it is not disputed that the taxpayer was the sole director of the corporation. Under the OBCA, it would seem that the taxpayer resigned before the first shareholders meeting without appointing a replacement director. Therefore, such a resignation would not be a legally effective resignation at all.

As Soulliere v the Queen shows, it is important to follow all the legal procedures when resigning as a director of a corporation. In order to minimize one's risk for director's liability, it is crucial to comply with both the relevant corporate law requirements as well as the necessary requirements stemming from the corporation's by-laws as well as the requirements of the relevant tax act. Being a director of a corporation can open a Canadian taxpayer to a number of potential liabilities beyond the Income Tax and Excise Tax liabilities discussed here.

David J Rotfleisch, CPA, JD, is the founding tax lawyer of Rotfleisch & Samulovitch P.C., a Toronto-based boutique tax law firm. With over 30 years of experience as both a lawyer and chartered professional accountant, he has helped start-up businesses, resident and non-resident business owners and corporations with their tax planning, with will and estate planning, voluntary disclosures and tax dispute resolution including tax litigation. Visit www.Taxpage.com and email David at david@taxpage.com.

Duque V. The Queen: Analysis and comments on director's liability